Rearcross made the journey to Cork last Saturday to face College Corinthians in the 4th round of the Munster Junior Cup but bowed out of the competition on a 2-1 scoreline after extra time. It was a brave and merited performance from a Slieve Felim side that was a tad unlucky not to snatch a winner at the end of normal time with James Rochford and Michael O’Gorman com 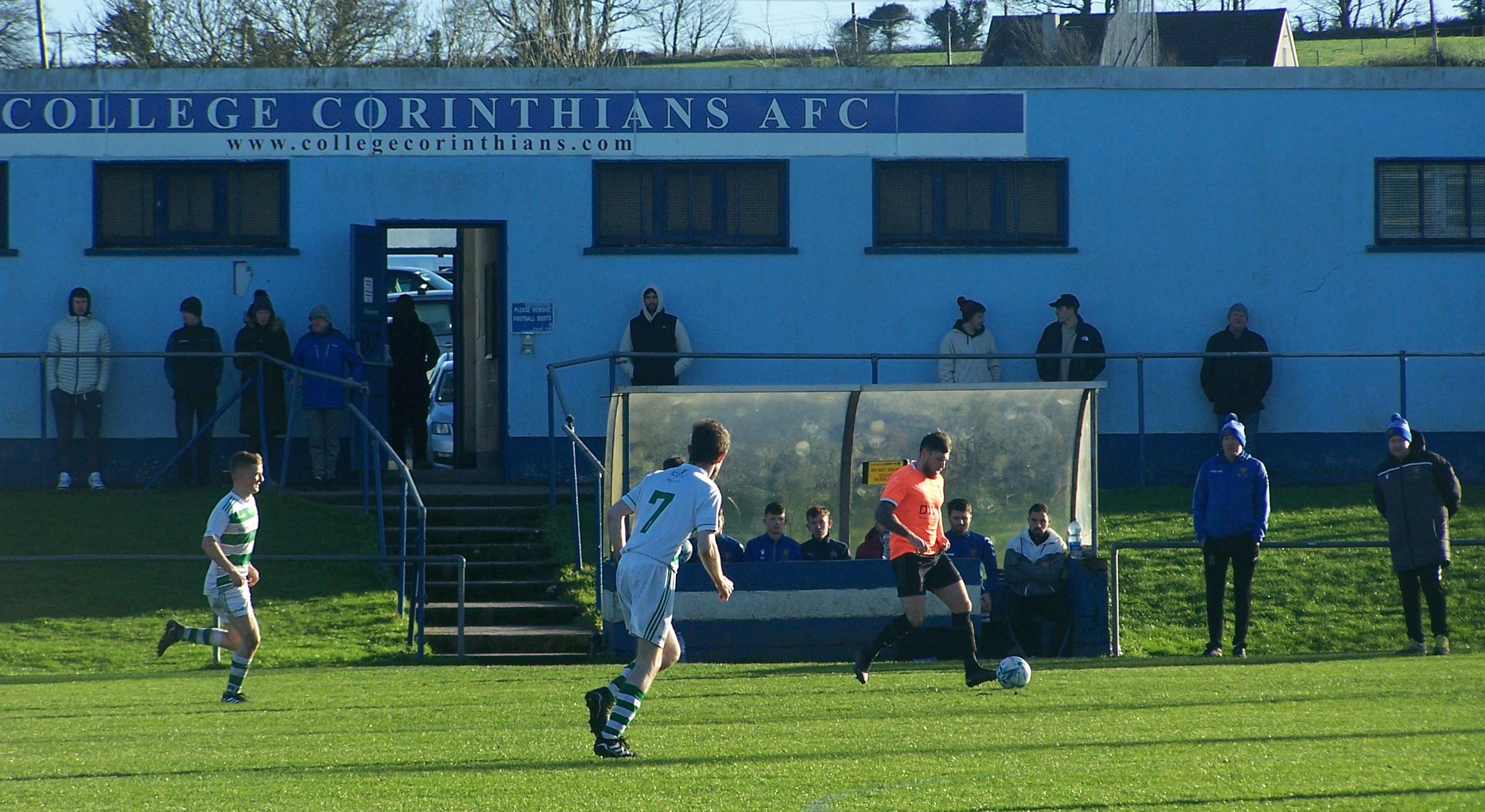 ing close. The game was played at a fast pace throughout with the home side more dominant in the opening half and created the opening chance when Fionn Molloy was through on goal in the 5th minute but a Greg Kennedy tackle averted the danger at the expense of a corner kick. Rearcross breathed a sigh of relief seconds later when a corner kick broke to Richard Cronin whose effort was thwarted and then claims for a penalty were waved on. The nervy start continued for Rea when a ball was splayed across the face of Cathal Kennedy’s goal when a touch was all that was needed. Rearcross made the first incision on eight minutes when a Darragh Kennedy run on the right saw the ball swung across the six-yard box but the opportunity went abegging. Paul Nolan had a fine game throughout and made a telling tackle on Fionn Molloy when a goal looked certain. Cathal Kennedy was the busier of the two keepers in the opening half and produced a superb save in the 16th minute when a break on the right saw the Rearcross number 1 reflex to block with his leg. Corinthian’s number 8 Richard Cronin was very influential throughout and sent a low whizzing effort outside the post on the 18th minute mark. The visitors were also having their moments and a good move involving James Deegan and Conor Nolan saw Philip Deegan coming close.

The Cork City side hit the front in the 25th minute when a lively Fionn Molloy got in to slice the ball between the posts from close range. The hosts were flying at that stage and it might have been 2 nil on the half hour mark, but Cathal Kennedy made a good block. Rearcross got back level on 33 minutes when Philip Deegan sent the ball across the square where Michael O’Gorman pounced in superb fashion before crashing the ball to the back of the net much to the rapturous applause of a large travelling support from the Slieve Felims. College Corinthian’s were rattled after this although it took another crunching tackle from Paul Nolan and some fine goalkeeping from Cathal Kennedy to keep the scoreline intact even though the hosts had claims for a penalty ignored. Rearcross finished the half stronger and Darragh Kennedy forced the keeper to parry 2 minutes before the half time whistle. The second half was a highly competitive affair as Paul Nolan continued his duel with Fionn Molloy with a firm challenge two minutes in. Cathal Kennedy was in the action again on 59 minutes with a point blank save from Jack O’Brien and then at the other end a James Deegan corner kick was headed just over by Michael O’Gorman. It was end to end for most of the second half with Richard Cronin and Fionn Molloy coming close for the home team 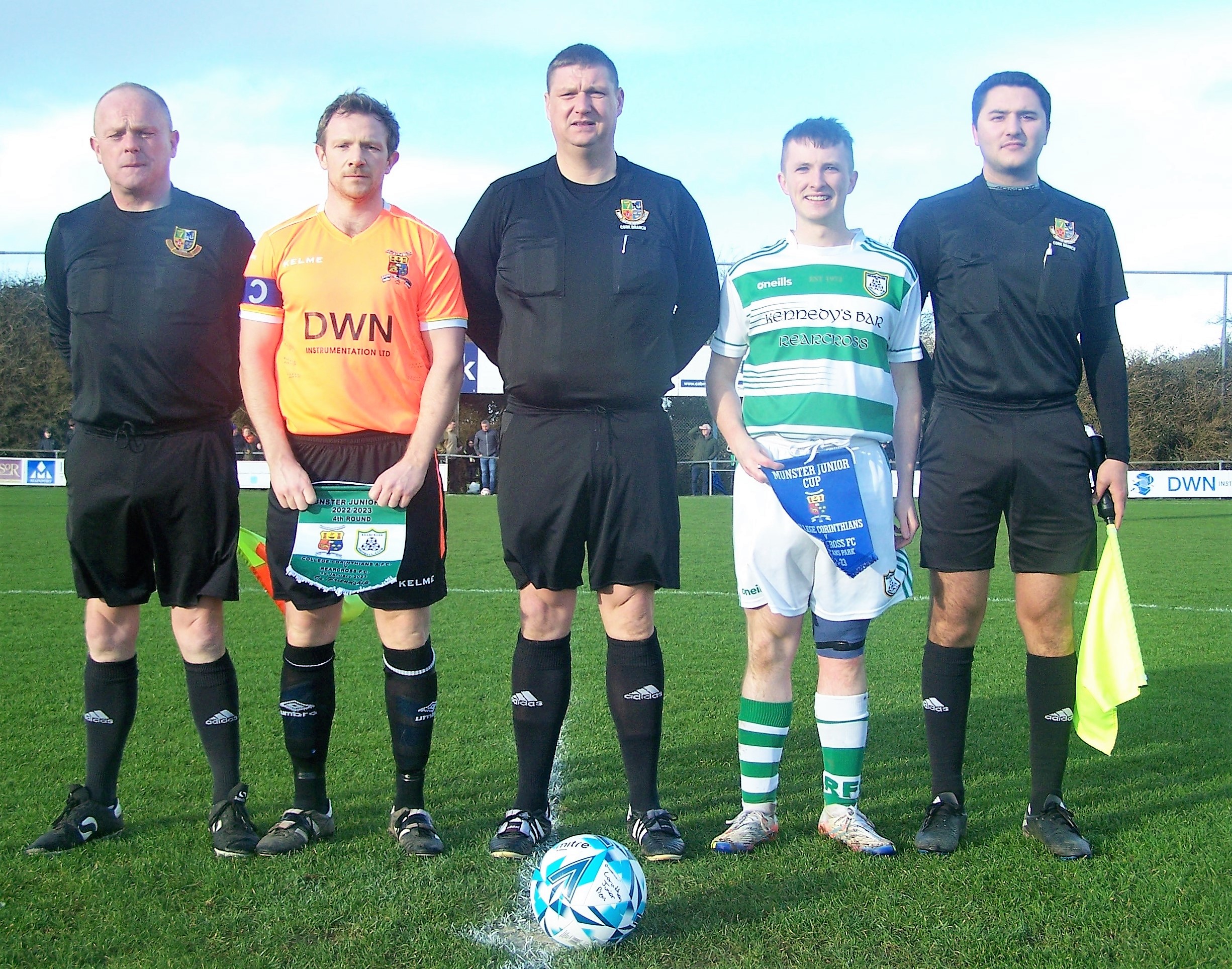 with latter’s effort finishing in the side netting. The NT&DL team dominated the final exchanges and a Michael O’Gorman delivery in to the six-yard box saw Dylan Ryan get a strong hand to clear the danger while David Fox wasn’t far away at the other end. James Rochford nearly stole the show with three minutes remaining when a smashing strike from outside the box, looked to have goal written all over it only for the ball to pull just left of the upright with the Corinthian’s keeper beaten and then Michael O’Gorman came close again on the stroke of full time with a strike that veered away from the target. Extra time was again well contested but the hosts grabbed the all-important goal six minutes in to the first period when Jack O’Brien found space to slide the ball home from inside the box. Rearcross battled gallantly to get back on par but it wasn’t to be on this occasion. Well done to both teams for producing a highly competitive encounter and College Corinthians are wished the best of luck in the next round. Rearcross will now re-focus their attention on NT&DL domestic affairs and will be hoping for good runs in the Premier Cup & Tipperary Cup. A big shout out for Rearcross supporters who travelled in large numbers to Cork for the game, thanks to match officials for an all round fair and balanced officiating display and finally our thanks to College Corinthians for their hospitality on the day.

Rearcross ‘A’ v College Corinthians AFC in the last 32 of the Munster Junior Cup, watch the live draw here