Rearcross U-13’s travelled to Nenagh Brickfields on Wednesday evening to contest the U-13 Division One Shield Final against League winners Borrisokane and came away with a heroic win following extra time and a dramatic penalty shootout. Rearcross while finishing runners up in the league wore the underdogs tag having lost twice to the table toppers earlier in the campaign. The opening exchanges were tame enough with Jack Slevin coming closest but Rearcross keeper Paddy Ryan was positioned to gather. The opener and a goal of real quality came on nine minutes when Conor Nolan was the provider on the right to elder brother Jack Nolan who sent the ball whizzing to the roof of the net from outside the box. Colm Hickey came to the rescue for Rea at the other end a minute later with some firm defending and then Jack Hickey was in the thick of the action to deny Borrisokane four minutes later with a well time tackle. Borrisokane got back on level terms with eleven minutes remaining in the half when a wind assisted kick-out broke through the centre of the Rea defence before the ball was prodded home from close range by Jack Slevin. 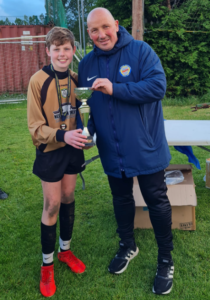 Rearcross had the elements in their favour in the 2nd half and pressed early on with good work by Sean Quinlan and then Liam Ryan made a crucial challenge on the edge of box. Rea lived dangerously towards the end of normal time with Oisin Reynolds and Patrick Carr to the fore to keep the scoreline intact. Rearcross custodian Paddy Ryan made a match winning save after reacting superbly to a deflection and changed his position to block on the line with five minutes to go. Borrisokane’s Mikey Gorman fired on target from 16 yards moments later but again Paddy Ryan was well positioned to keep the game alive and take the tie to extra time. The green & whites enjoyed their fair share of possession in the 20 minutes of extra time, Jack Nolan came close in the dying moments of the opening period with a darting solo run and was unlucky to see his effort lift over the crossbar. The second period was a tense affair as the minutes ticked away with both sides going in search of the elusive winner. Paddy Ryan in the Rea goals advanced to punch clear and then at the other end a swerving effort from Sam Hackett was inches outside the Borrisokane upright. Rearcross finished stronger as Conor Nolan swung in an inch perfect cross from the right but the ball was cleared to safety with seconds remaining.
Rearcross clinched the title in the penalty shootout, Jack Nolan set Rea on their way after slotting home the first spot kick and then Jack Slevin levelled it for Borrisokane. Paddy Ryan saved superbly to give the Slieve Felim outfit the edge and then Conor Carr gave Rearcross a 2-1 advantage with a well taken peno. Paddy Ryan was to the fore again with a fine save to leave Rea 2-1 ahead going in to the final pair of spot kicks. Up stepped Conor Nolan who calmly slotted home with a deft strike to seal a pulsating victory for the Shane Reynolds and Liam Nolan(B) managed side. Well done to all Rearcross and Borrisokane players on a memorable game.

NTSFL’s TP Sullivan presented the trophy to a jubilant captain Paddy Ryan and medals to the Rearcross players after the game before the celebrations began in earnest. Borrisokane were also presented with their league medals.

Thanks to match officials and specific mention to Jimmy McCarthy who is finishing refereeing at the end of this season after 43 years of service, a truly remarkable tenure by any standards.

The Club would like to acknowledge and thank Mid-West Oil for sponsoring the post-match meal for the players in Supermacs. 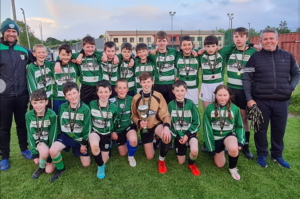