Rearcross U-14 Boys come from behind to win 3-1 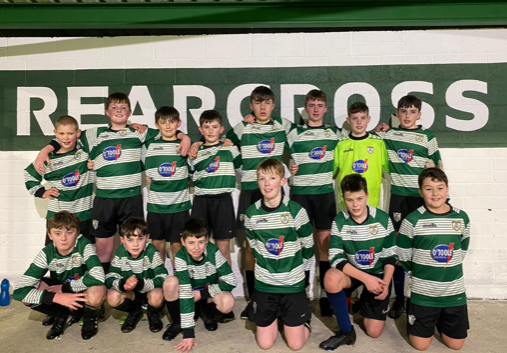 maximum points. The visitors hit the front with a fine strike from outside the box that finished in the right-hand corner of the goals. Rearcross upped the tempo and won a corner kick which was delivered by Jonathan Dawson in to the danger area where Seanie Quinlan was first to react with a fine strike but Fionn Shaughnessy got a hand to parry the ball, however Conor Nolan was on hand to finish to the net from close range. Silvermines finished the half strongly and it took some excellent goalkeeping from Paddy Ryan to leave it all square at the half time whistle.
Rearcross took the game to their opponents from the off in the second half and some fine tackles from the Rea midfield players really drove the performance upwards. A good move started in midfield by Liam Ryan set Jonathan Dawson through on goal only to be fouled outside the box. Jack Nolan floated the resulting free kick to the top corner of the net in what was a smashing effort. Silvermines didn’t give up and some staunch tackling by the Rea defence preserved their slender lead. The Slieve Felim side copper fastened the win late on when Jonathan Dawson’s corner kick broke to Jack Nolan who sent a delightful strike whizzing to the back of the net, well done to all on a fine victory.