Before the curtain could finally come down on the NT&DL 2020 season, there was the small matter of the Barry Cup final last Sunday. Some spectators brought their umbrellas for shade whilst others sought refuge in cars, but the Clodiagh and Rearcross players had no option but to endure the heat. It was a nervy start in Drombane, with both sides failing to get a foothold in the game. Rearcross chose to play a back five and hit the league champions on the counter through Michal O’Gorman and James Deegan, with Patrick Dawson occasionally providing support from midfield. Clodiagh had the better chances in the first half, Sam Van Dam and James Murray both had efforts which went just wide; however, it was the visitors who growing more and more into the game. 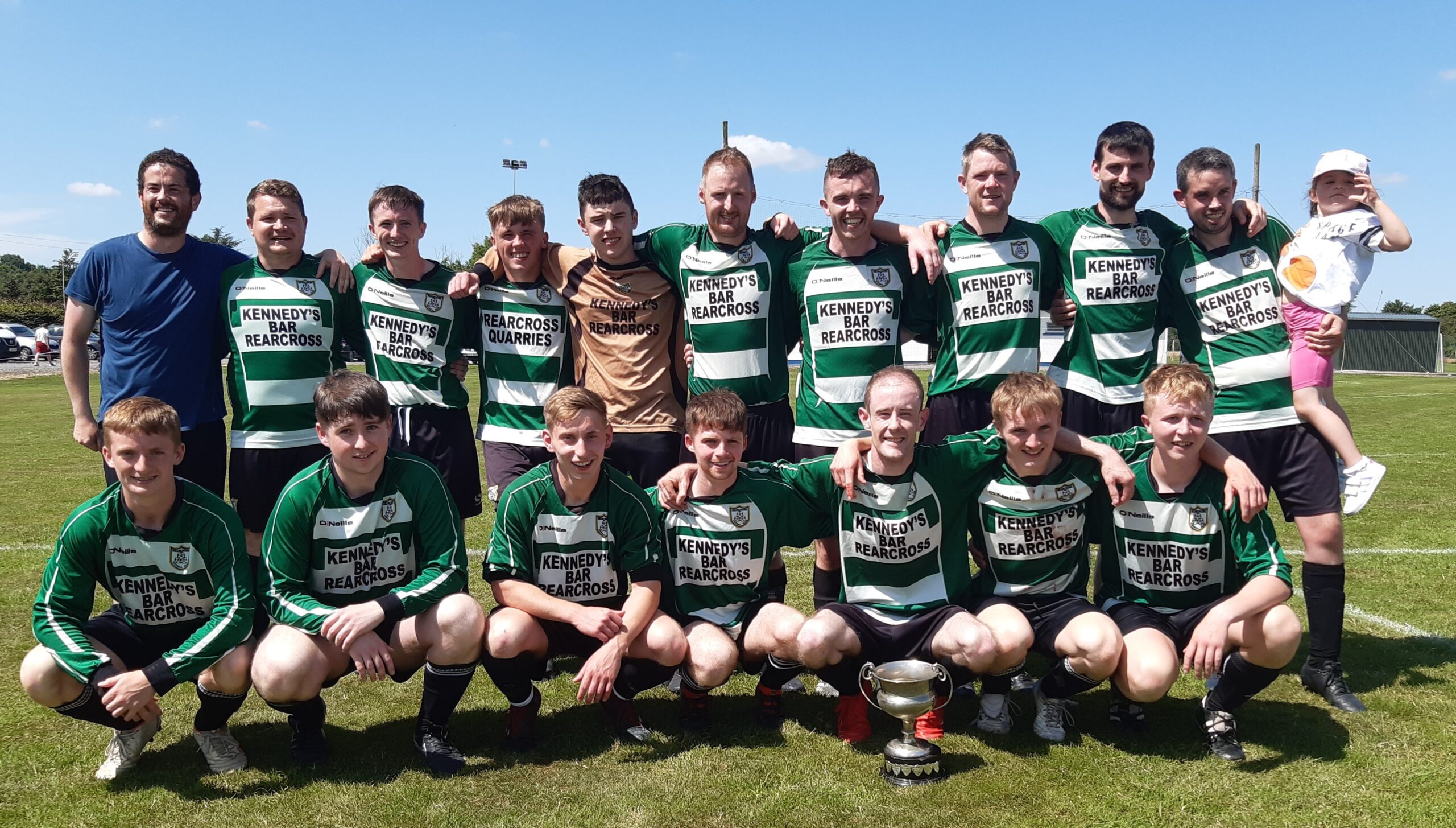 Early in the second half there was a feeling amongst the crowd that - due to the extreme heat - we were likely to see a stalemate. Jack Kennedy was impressive for the hosts on the day, but midway through the second half he failed to capitalise when the ball fell at his feet 10 yards out. This would turn out to be Clodiagh’s last chance for quite some time, as Rearcross began to turn the screw. With 20 minutes to go, Patrick Dawson lost his marker and unleashed a fine effort from a central position 20 yards out; the Clodiagh keeper was rooted to the spot, but he was saved by the upright on this occasion. There was a stoppage in play on the 82nd minute to allow for two Clodiagh substitutions; when play resumed, Rearcross finally broke the deadlock. Philip Deegan took a throw-in on the left and found Michael O’Gorman 25 yards out; the Rearcross hit-man cut inside on his right and dribbled across the face of goal, dodging two Clodiagh defenders before unleashing a low, right-footed strike just inside the front post. It looked as though Rearcross had done enough, but on the 90th minute the hosts forced the ball home after a skirmish in the box following a corner. Most people in the ground were unsure whether or not the ball had actually crossed the line; however, the linesman had a clear line-of-site and was well placed to make the call, the goal stood and forced extra-time in Drombane.
The first-half of extra-time was fairly uneventful; however, just before the break there was drama aplenty; Daniel Moloney burst into the visitor’s penalty area only to

be brought down by Cathal Kennedy in goals; Rob Harrington was involved in the foul too, but it was the young keeper who was cautioned by the ref. Rearcross were pushing hard for an equalizer in the second period of extra-time, but it was John Carew at the other end who looked more likely to score; Paudi Gurder almost played him in behind the vacated Rearcross defence, only to be stopped by the last defender back. With 2 minutes of extra-time remaining Rearcross found a way; Daniel Moloney committed a foul on the left, Michael O’Gorman swung in the resulting free-kick which Adrian Cooke chose to punch, but the clearance did not go far; Paul Nolan headed it back in and it made contact with the hand of Rob Doran; a penalty was awarded and Greg Kennedy dispatched from 12 yards, despite the keeper going the right way.
Penalties would be required to settle the last match of the NT&DL 2020 season. Adrian Cooke expertly saved Michael O’Gorman’s strike, whilst Puadi Gurder confidently sent Cathal Kennedy the wrong way. This time Cooke went low to his left to deny James Deegan, whilst Daniel Moloney went straight down the middle as Cathal Kennedy dived to his left. Cooke’s next act of heroics was to deny Patrick Dawson, who shot to the left of the Clodiagh keeper at a nice height. This would transpire to be a turning point in the shootout, as Clodiagh sent their next 3 penalties either over or against the crossbar; whilst Greg Kennedy, Rob Harrington, and Kieran Devitt all scored for the visitors. The match now entered sudden death for the remaining takers, Daniel Moloney and Stephen Rochford delivered for their respective sides, before Clodiagh missed the target once more. There were contrasting emotions at full-time, but both sides can be proud of their return this season. As the dust settles on the NT&DL 2020 season, it can only be said that concluding the 2020 season was a great decision, but also that the manner in which the decision was reached and conveyed to clubs was superb. Clubs will have a small period of rest now, prior to the 2021 season which is due to kick-off in early August.