The North Tipperary & District League is one of the youngest junior soccer leagues affiliated with the Football Association of Ireland, having been formed in only 1977. This league accounts for teams which reside in the Tipperary, Limerick, Clare, Galway, Offaly and Laois area, providing a large catchment area for the NT&DL governing body to manage and officiate. The original league catered for the entire county of Tipperary, until the creation of the Tipperary South District League in 1977.

Over the years, many of the sides associated with the league have advanced in both regional and national competitions representing the league and clubs at the highest standards possible. The NT&DL aims to provide a platform for all individuals who wish to play the beautiful game across its Junior and Youth divisions, ensuring that the best possible resources and facilities are available. Currently there are 21 clubs affiliated with the NT&DL, who primarily compete over the autumn and winter months.

The recent progression towards playing over the spring and summer months is now becoming a reality with the season starting in early June 2016, to allow for the transition from winter soccer to summer soccer, which at present is only seen in a handful of leagues across the country.

An important aspect of maintaining the game in typically GAA dominated areas is the promotion and progression of underage soccer which the North Tipperary Schoolboy Football League can certainly be credited for as this league goes from strength to strength each year.

The NT&DL have resurrected its Awards Night in recognition of the hard work and on-going commitment from both players and club members over the playing season.

The following Clubs have participated in the NT&DL at one stage or another since the NT&DL league was founded in 1977. Incidentally the Tipperary League covering all of the county was formed in the early sixties, however the League split in to a North & South section in 1977 which saw the emergence of the North Tipperary & District League (NT&DL) and the Tipperary Southern & District League (TSDL) operating as two separate entities. 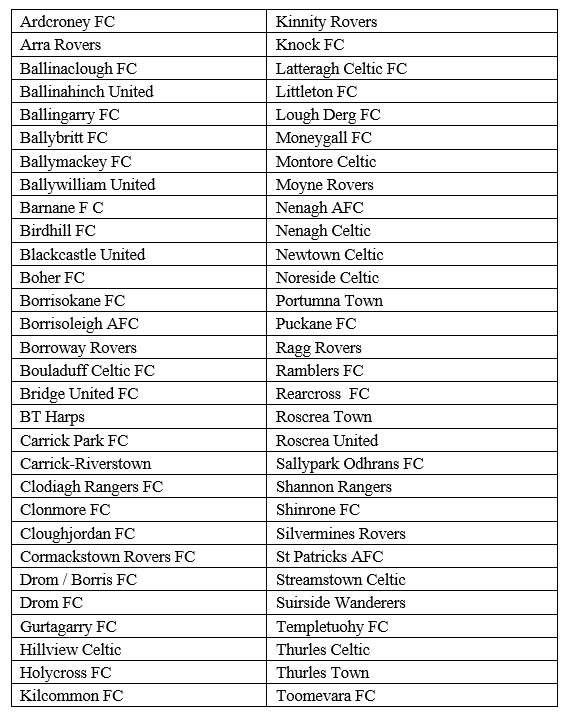