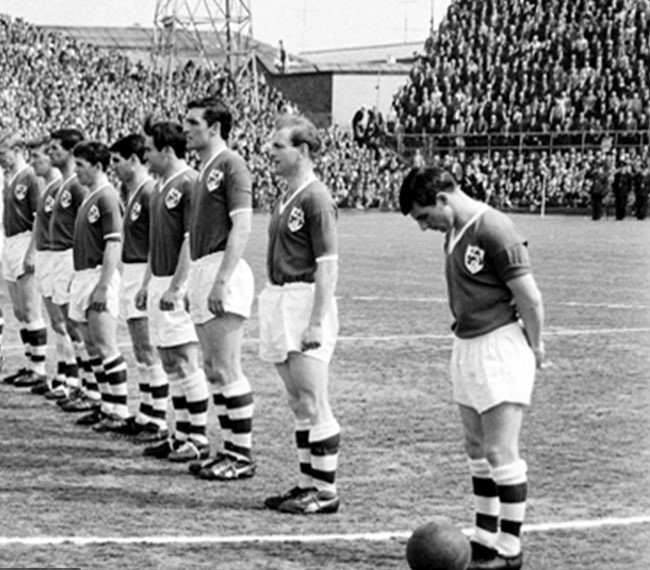 To football enthusiasts the year of 1966 evokes images of Bobby Moore being held shoulder high holding the Jules Rimet trophy aloft following England’s victory over Germany in the World Cup Final. What might come as some surprise to many however is that the Republic of Ireland football team came tantalisingly close to qualifying for that very same tournament.

For the 1966 World Cup Qualifiers the Irish side were drawn in a small group with Spain and Syria. Syria subsequently withdrew in protest in support of the African teams who were in disagreement with FIFA over the amount of qualification places allocated to African nations for the World Cup Finals. The result of all this meant that there was a simple 2 match competition between Ireland and Spain to determine which team would qualify.

The first leg against Spain was played in Dalymount Park before 42,000 fans on 5th May 1965 with Ireland winning 1-0 through the help of a Spanish own goal scored after 61 minutes. The second leg was played in Seville on 27th October of the same year and despite Ireland taking the lead after 26 minutes compliments of a goal scored by Andy McEvoy of Blackburn Rovers, Spain went on to win comprehensively with a 4-1 scoreline. Goal difference back then did not count and so it was that a third game had to be played at a neutral venue between the sides to determine who would qualify for the World Cup Finals.

Negotiations between both countries ensued to determine the venue for the third game. The Spanish pushed for the game to be played in Portugal while the FAI wanted to have the game played in London or Manchester. Both sides finally agreed to have the game played in Paris which was to be played on 10th November 1965. Travel arrangements for Irish fans was a far more difficult affair back in the 60’s resulting in both sides lining up against each other at the Parc De Princes in front of 35,000 fans most of whom were Spanish. The game was decided by a solitary goal scored by the Spanish midfielder Jose Ufarte after 11 minutes. Despite their best efforts the Irish side were to have no joy on the night and so their aspirations to secure a place in their first World Cup Finals would have to wait a further 24 years to become a reality.

A young Eamon Dunphy made his international debut for Ireland on the night alongside with experienced notables such as John Giles, Shay Brennan and Tony Dunne. Interestingly the Irish goalkeeper Pat Dunne who played for Manchester United at the time later became player / manager for local side Thurles Town FC from 1978 – 1980.

One wonders what influence the Republic of Ireland team would have had on a group of young football enthusiasts in Rearcross and elsewhere if they had qualified for the World Cup Finals in 1966. We can only imagine that their exploits would have been emulated in the Creamery yard in the long evenings of that summer.