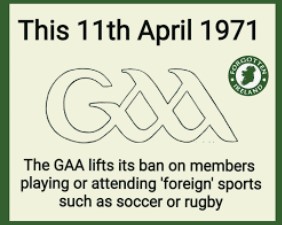 It is doubtful if any rule in the history of Irish sport caused as much controversy and conflict as the GAA’s Rule 27 or as it was more commonly known the ‘The Ban’. To understand ‘The Ban’ and the circumstances that gave rise to it one has to go back to the formative years of the GAA. Ironically the first ban was related to athletics and not to the playing of ‘foreign’ games.

Shortly after the founding of the GAA in 1884 the GAA came into conflict with the Irish Amateur Athletics Association (IAAA). At the time the GAA was heavily involved in the promotion of athletics and the IAAA, which was largely Dublin based and which had a large Unionist involvement imposed a ban on athletes competing under GAA rules. This ban was introduced with a view to ‘strangling’ the new organisation at birth so to speak. The GAA reciprocated with a ban of its own, and so the tenor of sports bans had been introduced.

Around the same time a struggle was going on between IRB radical elements and Irish Parliamentary Party (IPP) or constitutional elements for control of the GAA. The Catholic Hierarchy and Clergy largely supported the IPP group. Matters came to a head with the revelation that Charles Stewart Parnell was being cited in a divorce case and the IPP split bitterly as a consequence. The split carried into the GAA which at the time was dominated by the IRB faction. The GAA at the time strongly supported Parnell and this brought them into conflict with the majority of the Catholic clergy and hierarchy. The consequences of the ‘Parnellite Split’ and it’s fall out, very nearly destroyed the GAA and in the years from 1891 to 1894 the GAA effectively went out of existence in many counties. An example of how tenuous the existence of the GAA was in those years was that only three counties Cork, Kerry and Dublin attended the annual GAA convention for 1892 and these three counties were the only three that participated in the All-Ireland Senior Hurling Championship for that year. In football six counties took part with the addition of Waterford, Roscommon and Kildare. In County Limerick no GAA championships were played between 1892 to 1894 and although the South Limerick Hurling Club are credited with winning the championship for 1893, they were effectively an amalgamation cobbled together for a one match challenge against St Michael’s Temperance Society. It was also during this period that a ban was brought in against GAA members playing the four field games, Soccer, Rugby, Cricket and Hockey.

The election of Dick Blake from Meath as Secretary of the GAA in 1895 had a galvanising effect on the GAA and although Blake could be dictatorial and had a tendency to make enemies easily, he nonetheless re-organised the GAA in a very effective manner. Among the changes effected by Blake was the revocation of the Ban on ‘foreign games’. In this he was supported by Archbishop Croke who was against bans in any case.

This situation obtained more or less until 1906 when a rigorous ban against foreign games and participation by British forces military and police was reintroduced at the 1906 Congress when two men identified with the IRB T.F. O’Sullivan of Kerry and Patrick Nash of Dublin got control of the GAA Congress. Blake had by this time been side-lined and the way was now clear for a more strict enforcement of ‘The Ban’. Surprisingly one of the more moderate counties at the time with regard to the implementation of the rule was Cork which in more modern times was one of the more trenchant against the playing of ‘foreign’ games.

For the next sixty or so years the vexed question of playing and attending games and indeed dances that were not deemed national in tone was to bedevil Irish society. Motions were regularly submitted to the GAA congress to rescind but on each occasion these motions were either thrown out before they reached the floor of the congress or were defeated on a vote.

In the nineteen sixties, with the advent of television, and the greater awareness by ordinary members pressure to remove ‘The Ban’ began to mount. At the time motions to remove the rule could only be submitted every three years. In 1962 the Carlow County Board submitted a motion to have Rule 27 deleted, but this motion was heavily defeated at Congress. Following this defeat, members of the Civil Service GAA Club in Dublin began to get deeply involved in a campaign to get rid of the rule. The leaders of the campaign were Kerry native Tom Woulfe and the former Mayo footballer, Eamonn Mongey. Mongey was a sports journalist with the Sunday Press and although he had to be careful how he used his position he was, nonetheless, a powerful voice for change.

In 1965 and 1968 motions demanding the abolition of Rule 27 were heavily defeated as the conservative element within the association rallied for retention of the rule. A select committee set up to investigate the need for ‘The Ban’ recommended its retention but a County Meath motion, submitted at the 1970 Congress, that was held at Salthill in Galway requiring that each club have its members vote on the rule was passed. Effectively this marked the end of ‘The Ban’ as each club throughout the country cast its vote and long before the 1971 Congress, which was held at Queens University in Belfast, it was clear the members voted overwhelmingly for deletion of the rule. Only two counties Antrim and Sligo voted in favour of retention. The Rule that caused so much angst and controversy was deleted from the Rule Book after the 1971 Congress which was held on the Easter Weekend in Belfast. In the heartland of one of only two counties that voted for its retention.