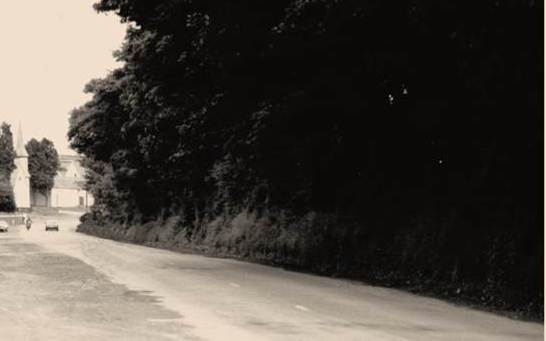 A Stroll through Rearcross in the 1960’s

As football was making its way to Rearcross in 1966 it is no surprise that the landscape and the way of life were quite different from what we are familiar with today. While Ireland was beginning to benefit from a developing economy, opportunities were still hard to come by for the young population in rural areas like Rearcross. Farming was still the mainstay of the local economy along with those lucky enough to find a trade or to work for the Public Service. Sadly, many younger people were faced with no alternative other than to look overseas for their chance to make it in the world.

Rearcross in the 1960’s like so many other rural areas in the country was surprisingly self-sufficient.

The village boasted a number of small businesses that provided a range of services to the local population. It is hard to comprehend now, but the village had very few individual private dwellings.
Imagine approaching Rearcross village from Shanbally in the 1960’s you would first encounter O’Toole’s cottage alongside Packie Collins’ grocers on your left. Directly opposite would have been the local post office managed by Norrie Nolan, soon afterwards the post office would be re-located to Packie Collins’ grocers and would be run by Dan & Kathleen Kennedy for the next 40 years. The manual telephone exchange was also located here until the system would be automated in the 1980’s.

Just a little further up the road you would come upon the draper’s shop owned by Mary Hayes. Many a local person was fitted out with the finest attire from here. Approaching the crossroads in the village you would see the local National School which would later become the Community Hall. A low wall running along the roadside in front of the school would be removed in later years. To the rear of the school a playground which was divided in half by a wall separated the boys from the girls during their breaks.

If you were to pass by the Church during mass at the time which would have been celebrated by the local Curate Fr. Fitzgerald you would get an insight into the various modes of travel used by the locals. Outside the church wall you would likely see anything from ponies & traps, bicycles, Honda 50 motorcycles and of course the increasingly popular car. Heading further down the road was Ryan (Vora’s) on the right-hand side. John Ryan (Vora) was the proprietor of the premises, a building which has witnessed so much history in the area going back to the time of the War of Independence. The premises included a shop, chemist, hardware and public house with petrol pumps located across the road.  The building was also home to the local Garda barracks. The local dispensary was located across from Ryan (Vora’s) where Dr. O’Dwyer from Newport visited once a week to carry out his medical duties.

Heading further in the direction of Newport you would see the Creamery on the right-hand side. This busy spot managed by Brendan Owens was the meeting point for many farmers each day. Local man Mick Caplis would take over as manager of the creamery some years later. Rearcross Creamery at the time was independent of any Co-op but later it would amalgamate with Cappamore Creamery and ultimately become part of Dairygold Co-op. It is here you might have heard the shouts of young enthusiastic football players showing off their newfound skills behind the Creamery building of a summer’s evening.  Next door to the Creamery building Jim Nolan would be carrying out his trade as the local blacksmith. Jim would later take over Nolan’s pub in Barnadomeeny which later became known as the Congo Bar.

If you were to travel a little further down from the village you would come upon Danny Heffernan’s homestead. Danny, who was an accomplished tailor, provided many local people with fine suits and also provided many entertaining stories to those who knew him. Heading back up towards the crossroads and just beyond was Kennedy’s bar and shop managed by Tom and Breda Kennedy. If you were to drop into Kennedy’s for some refreshments, you would be handing over 2s 7d for a pint. It was some years later before the lounge would be added to the premises.

The dance hall which was owned by Mick Carey, and which has since been demolished was situated on the right-hand side just up from Kennedy’s. The hall saw many great nights of entertainment including fundraising dances run by the Legion of Mary, Muinter Na Tire and various political parties to name but a few. The fledging Rearcross Football Club would also have organised fundraising dances here in later years. Refreshments were served in the supper room usually organised by the local ladies and unless your “supper ticket” was produced you would have to do without for the night. The hall also played host to the many plays put on by the well-respected local Drama Group at the time. It was also the time of the Showband era and the well-known Mick Delahunty, and his band played to a packed audience in the hall on one such night. The timber floor in the hall was known to be treated to a covering of “Lux” soap flakes before a night of dancing which resulted in the dancing enthusiasts being able to slide along the surface with a sense of style.

Next door to the dance hall was the teacher’s residence where the national school headmaster Phil Murray resided at the time. This house later became the home of Seamus and Mary Jo Reynolds.

At that time there was no mains water supply in Rearcross and the surrounding areas. Water had to be collected from a number of wells in the area and so the installation of the Rearcross Water Scheme in 1968 brought some comfort to many households. Bill Duggan was given the duty of foreman for the gang of workers who installed the pipe network.

Travelling over the road to Barnadomeeny you would come across Mick Caplis’ homestead at the crossroads. Mick was captain of the victorious Sean Treacy’s hurling team who won the 1966 County Intermediate hurling final beating Kildangan.

Just down from Barnadomeeny Cross was where you would have met Jimmy Armshaw if you had a pair of shoes that needed mending or if you required his services as a water diviner. Jimmy’s song writing and musical talent also entertained many locals over the years. Further up the road from Armshaw’s was where Winnie Carey lived. Winnie was always at hand to perform the age-old task of bone-setting for the unfortunate individual who required the procedure.

On past the Barnadomeeny Cross towards Kilcommon you would come upon Nolan’s Pub which was owned at the time by Jimmy Nolan. Later this pub was to become known as the Congo Bar and at this time it consisted of a small single storey building.

Further on from the Nolan’s pub on the right-hand side was Deere’s grocers.  The premises was run by Packie and Mary Anne Deere. Packie Deere was also the local postman at the time making each delivery on his trusted bicycle. Across the road from Deere’s grocers was Jimmy Nolan’s carpentry workshop. Apart from Jimmy’s talent of working with wood, he was and still is a well noted storyteller and local historian.

Time has moved on in Rearcross and the surrounding areas in the intervening years and for better or worse ways of life has changed with it. While it is easy for those to look back with fond memories on how life was a simpler affair and how the summers were longer and warmer it must not be forgotten that many aspects of life were tough for people trying to make their way. Nevertheless, the sense of community spirit in Rearcross has remained intact being passed down through the generations and with some luck will carry through for the next 50 years.