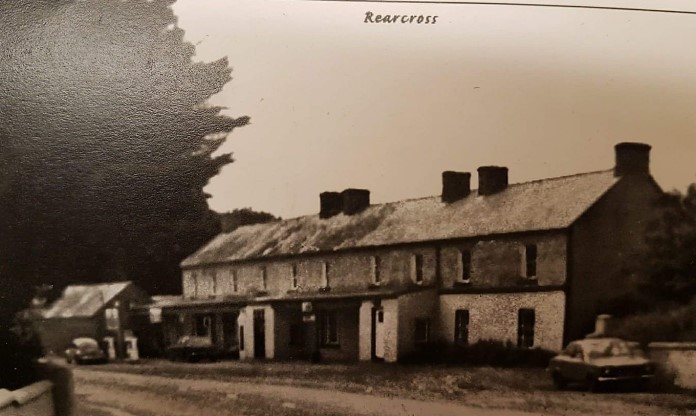 Rearcross – Childhood memories of Football, Music and Growing Up

My first memories of soccer or football probably began after watching Argentina play.  I have done a bit of research on this and I cannot pinpoint the exact match – it wasn’t during the 1966 world cup it was a few years later. The flamboyancy and skill level of the Argentina team with players like Carlos Babington and Rubens Ayala had not been seen this side of the Atlantic as we were conditioned to football being an English invention solely, and how could anyone else play it better than them. By 1970 Brazil were the team – Pele, Tostao and Jairzinho. Even my father who was not a great sports fan outside of Athletics and most of the older locals around were captivated by them and also the fact that Gianni Riva had his left foot insured for a million pounds was a major pub talking point.

Soon all was to change – change utterly as the innocence was shattered by the assassination of JFK in 1963 and also by the shooting dead of Tom Kennedy’s brother, Rody, in a bar in America when he bravely confronted robbers in a bar where he was working. Anthony Mc Loughlin was the boy I used to cling on to – follow around – look up to – as he was good at most things and was getting ready to go to America to join his brothers there. He was also good on the accordion and the instrument also became my passion even to this day.

When Anthony left for America, I was a little rudderless until – along came Johnny Gleeson with his “kickabouts” on the concrete behind the creamery where many a shoe got worm out prematurely. We were soon joined by a close group of other lads from around the village.

From there on, the opportunity to gain more respectability as a little club emerged with grander ambitions for example to join the North Tipperary league. Regular tournaments began, playing teams from Newport and Croughlahan with many a heated encounter and disputed refereeing decisions. I remember the Shanahan brothers Dan and Jody, and Mossy Ryan (Luke) who really gave us their support. At one stage we even played a Gaelic Football match against Toor which was a pretty heated affair which I do not think we were ever going to win on Toor’s home patch. On another occasion we took a group of under 14’s to Thurles in a horsebox got beaten 24-1 and on the return journey, the horsebox became unhinged more than once. But we survived kept a low profile for a few days the event blew over, but it went down in local folk memory.

A few years later, I found myself in Cape Town, South Africa, where I also played football for Camps Bay football Club. The standard was very high and there were probably four to five senior teams, with also a veteran’s team playing occasionally. The setting was idyllic against the backdrop of Table Mountain, and we played in the Western Province Leagues. Strangely enough the worst weather conditions I ever played in, was in Capetown where we had to abandon a game because of a blizzard of hailstones the size of golf balls. When memorising this event I said to myself that “this could not be true” as if my memory was “gilding the lily”. But if you do an Internet search, this event is not totally unusual for Capetown weather in their winter. Another thing which was popular there were ex-patriot country team leagues with teams representing for example England, Portugal, Italy and Greece competing for their county as it were, these games were mainly on a Sunday with the Western Province matches on a Saturday.

The social life around the club was really good with regular barbeques or briefest as the South Africans called them with plenty of steaks, boerewors, beer and wine flowing. Normally the brai or barbeque would be set into a metal barrel cut horizontally with plenty of room for large amounts of food, nothing fancy. Who financed all this probably was a combination of contributions from players but also from local patrons and business leaders who attended club matches and were social members and enjoyed the camaraderie the club provided as a social outlet in Camps Bay.

In fairness the South Africans were a good group who were welcoming. Mention of rugby also generated heated discussions where every kick and play was analysed particularly during the Lions Tour of 1980. I only have good memories of my football and social life there.

Some famous ex English footballers were also members like John Sissons who player for West Ham in the 60’s and who scored a goal in an FA Cup final – by this time he had just retired his last professional club was Capetown City. Some other players of lesser fame from lower divisions from the UK were also there and some of these did coaching – all voluntary. Football was serious and above all great fun and we trained intensely a few nights a week and then a few beers later in the club house bar. During the above time I had bought an accordion in a pawn shop so with this addition there was plenty of “bending of the bellows” with many a rendition of the “Leaving of Liverpool, “Danny Boy” getting the club house buzzing after a game and relax us for the night ahead.

Looking back on it all now all that happened helped to mould us into the persons and people we became, never forgetting the ancestry and history of our local land and people. As one old timer put it “you could learn more at the cross of Rea than anywhere else”. Another lasting legacy of my time in Rearcross is the start we got playing music in Eddie Nolan’s workshop under the tuition of that wonderful, gentle and patient man Kieran Mc Namara. Today I enjoy playing and listening to the music of the old Italian “fisarmonica” legends from the 1930’s onwards like Gorni Kramer and Luciano Fancelli.

The club is obviously a credit to all of you who have helped it grow and provide the great amenity it is today. It is a credit to the community and a nice legacy left by the older generation many unfortunately no longer with us but always remembered in our prayers, thoughts and memories.