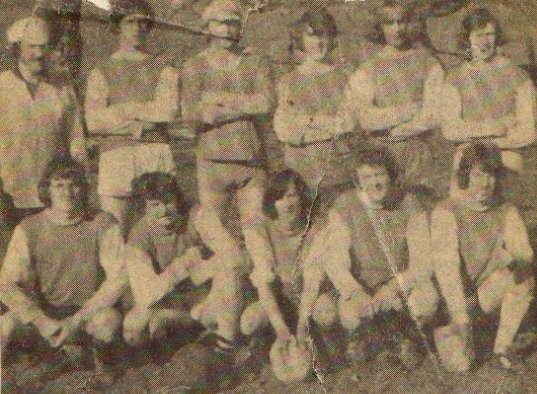 The following history is courtesy of Johnny Gleeson who was one of the Club founders, a stalwart and soccer pioneer in Rearcross and indeed the Slieve Felim region in the seventies and eighties. The Club is indebted to Johnny for his insightful work and effort, sometimes against the odds especially in the early days.

We can now look back with some amusement on the early years of soccer in Rearcross, though at the time those events were anything but amusing. Until Radio Teilifis Eireann (RTE) television began broadcasting in 1961 it is safe to say nobody in Rearcross had any interest in, or knowledge of the game. Few would have seen it played, especially at a higher level, except for emigrants across the water or those living in Dublin. Following R.T.E.’s opening, occasional brief footages from the English and Scottish leagues were screened. Local youngsters who took more than a passing interest in Association Football after witnessing, albeit briefly, the sports top exponents and teams, and accompanying atmosphere on T.V., would regularly tune in to BBC Radio on Saturday afternoons from 1963 onwards, when the second half of a prominent fixture would be broadcast live. Those years, from 1963 to 1970, marked local youngster’s introduction to names such as George Best, Johnny Giles, Billy Bremer, Geoff Hurst, Norman Hunter, Shay Brennan & Tony Dunne, the list is endless. In 1966 R.T.E. gave extensive television coverage to the World Cup, which didn’t please everyone in the country, especially the womenfolk. With just a single channel operating, and only for five or six hours a day, the decision to postpone or cancel regular programmes to accommodate Football’s blue riband event was not made easily. Somehow the station managed to find a middle ground, screening as much as possible of the films, soaps etc, whilst also transmitting vital World Cup matches, and later highlights. I think they may have gotten permission to extend somewhat their usual broadcasting hours of those years. It was then that soccer really began to catch the imagination of the youth of Rearcross, and Ireland as a whole.

The concrete yard behind the creamery was where all the action began, twenty or more boys would gather there every summer’s evening from 1966 to 1971. Kick off would be around 7 o’clock, and the only times our faces took on a sad appearance was when the sun began to disappear behind Dinny Kennedy’s hill. John Duggan (R.I.P.) and Pius Armshaw (R.I.P.) were amongst the stars of those encounters. John (“The Doug”) Duggan would begin work at 8-00AM each morning and arrive for play immediately after work and continue to be fresh and full of life after up to four hours of football action.  After a few years on concrete, the local lads decided that they were ready for some real action and needed to display their skills on grass. Unfortunately, grass was in short supply for aspiring local soccer stars then. The time had definitely arrived for them to go out on grass, and it had to be achieved by hook or by crook. Eventually it happened, by crook. In 1971(July) a challenge was arranged against Urlingford. The Kilkenny outfit arrived expected to be greeted by a well organised and oiled local machine, as they had been led to expect. Instead, they found their hosts had no field, and only a battered plastic football which had spent most of its useful life being unceremoniously blasted against cement walls by sturdy feet equipped with hobnail boots and other non-designer footwear. We eventually invaded a local farmer’s field when the owner had departed on a day outing. It was a “jumpers for goalposts’ affair. At the start it was just 8 or 9 aside, but players of all shapes, sizes, and ages, kept appearing as if from nowhere. The action continued for almost three hours, with at least forty players on the field at the end. Some of those who participated in that game lacked even the most basic of soccer knowledge.

One thing was clear though; the appetite for the game was mushrooming. In June 1972 a meeting was called for the purpose of getting an organised Club into operation. It was held at Ryan’s Bar and attracted a large attendance. A committee was elected, we were now organised partially at least. In 1971 and 1972 Tipperary hurling was on a high, so in a way, many were surprised that soccer was so popular, not alone in Rearcross, but also in neighbouring areas. I suppose the answer lies in the fact that all the young men were true sportsmen. History or politics never entered into it. They wanted to play sport and they did. Many members of Rearcross F.C. divided their loyalties with Sean Treacy’s G.A.A. Club. One of Rearcross F.C.’s founder members, PJ Caplis once played a soccer game, a hurling match and a Gaelic football encounter in the space of 24 hours. That epitomised the commitment to sport of Rearcross F.C. members’ right to the present day. In 1973 we impulsively entered the Tipperary league, no North Tipperary & District League existed then. The league was for the entire county, though the vast majority of the teams were from the South Riding. Our first and only game was against Nenagh Town. We had great difficulty acquiring transport; we arrived at Islandbawn over an hour late. We couldn’t continue in the league due to the transport situation.
The first jerseys were bought at Nestors in Limerick, thirty pounds for twelve good quality shirts. Nestors also supplied our first real football, the same design as that was used in the 1970 World Cup. It was the first modern branded ball. Up to 1970 all top games, games of all levels in fact had to make do with the old-fashioned models in use since early in the 20th Century.

A few youth’s games were played in 1972 and 1973, we played an under 15 match at Kilcommon cross against St. Anthony’s Boy’s club from Dublin, we later took on Peake Villa in a youth’s league game. It was an occasion best forgotten, but sadly refuses to leave the memories of those concerned. It was the day of the horsebox, eleven young players crowded into a horsebox attached to a blue Mercedes. On the journey the equine carrier decided to become unattached on two occasions. Each time it was found safely with its cargo, we managed to complete the journey and parked in Liberty Square. Everyone tried to vacate their mode of transport at the same time hoping and praying that no townie eyes would gaze in their direction. The situation was bad enough, further torture would be totally unbearable, and more pain was to follow as the slick Peake Villa trashed their traveling opponents. It was a sorrowful bunch of lads who boarded that horse-box after the game, we urgently required the sanctuary of home, thankfully the horse-box stayed secure. Going back to the start again, our second competitive adult match was played against Glosha in Caplis’s field opposite Mary Hayes’s house (now Quigleys).

A women’s team was also formed in 1973, and their early games were against Hollyford, Thurles, Killaloe, Pallasgreen, Cappamore, Garryowen, Toomevara, and a team from Galway city. Over the years, players from Newport, Kilcommon and Cappamore played with Rearcross. The best local ladies’ teams operated from 1978 to 1985. The girl’s community games team won the County award on three occasions and reached one Munster decider. In later years, many of those players made a big impression in the Limerick Ladies League. The first local woman to score a goal in a competitive fixture was Kathleen Coffey. The top marksman for the men initially was Ger Duggan.

The first local tournament was held in June/July 1972 and was a huge success. At least twelve teams entered, Crough Rovers and Murroe met in the final on a hot Sunday evening in July before a crowd of over 200 people. The referee was the late Sammy Ryan of Golden, who was to become one of the leading GAA referees in Tipperary. Sammy continued to have a great love for soccer. Murroe scored early in the game and retained the lead up to four minutes from the end. Then Mossy Ryan (L) pounced with two goals in two minutes to send the huge Crough following wild with delight. They celebrated long and hard that night, and some of their supporters were making their way home at 6-00AM on the Monday, singing as they went, on shanks mare and bicycles. The late Fr. Tom Hayes P.P sponsored that tournament.

Some fundraising dances were held in 1972 and 1973 in the old hall in Rea, and in Kilcommon hall. The Club tried to get their own disco started, Gerry Quigley (now in Kilmallock) looked after the electrical work. The discos did not succeed due primarily to the fact that young people at that time had very little money for socialising. The Club’s first tour was in August 1972 to Ballybunion, Tralee and Killarney. We arrived home at 6-00AM on the Monday; the bus cost thirty pounds and Matt Treacy, Thurles was the driver. In 1973 the destination was Salthill and West Clare was chosen in 1974.

The Western League was founded in Rearcross in 1973 to cater for all the teams operating in the Slieve Felim Region then. Crough Rovers were the Manchester United of the league and every effort, fair and sometimes foul, was used to lower their banner. Referees were known to assist Crough’s opponents. The Western league only continued for two years. Transport, finance, lack of referees and playing fields, all conspired to halt the league.

Three soccer club members formed a ballad group in 1972, John Duggan (R.I.P.) on vocals, and Seamus O’Toole and John Ryan (musicians), they got a number of bookings lounges in the region. They called themselves “Stage Three”. There was a wonderful atmosphere the Rearcross soccer scene from the start, which I believe is now more in evidence than ever. Things have certainly changed dramatically from the days of no field, burst footballs, horseboxes, no referees and referees without whistles!!”