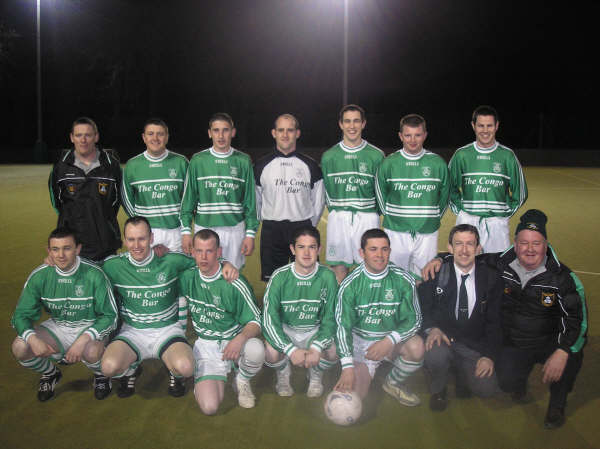 Rearcross FC took to the airways on three occasions with trips to London in 1995, 1997 and 2006, all the trips were truly memorable occasions.

Our first excursion took place in 1995, a trip to Loftus Road was the first official engagement where Everton were 3-2 winners over Queens Park Rangers. The game was tied on two goals apiece going in to the final stages, Les Ferdinand and Kevin Gallen scored for QPR while Stuart Barlow and Neil McDonald were on target for Everton. The Rearcross travelling party had left Loftus Road a minute before the final whistle to make their way to Clapham for a Friendly against Clapham Celtic when Andy Hinchcliffe scored an injury time winner for Everton. The game against Clapham was played on an all-weather pitch which was the Club’s first time to play on an outdoor all-weather pitch and indeed a first time to play under floodlights, a tight encounter saw the hosts win on a narrow one nil scoreline with Denis Kennedy turning in a man of the match performance for the touring side.

A return visit to London took place two years later in March 1997, a visit to White Hart Lane was first up so see Spurs and Leeds United with the home team winning a one nil scoreline, Darren Anderton scored the only goal of the game which also saw Tony Yeboah play his last game for Leeds throwing his jersey to the pitch after being substituted in the second half. Rearcross played Clapham Celtic the following day and edged the encounter on a one nil score, Ger Kennedy scored the only goal of the tie to secure the Club’s first overseas win.

Our third trip took place in 2006, a travelling party of 50 members arrived in London on the Friday evening and played the first of two friendlies, losing 2-0 to Clapham Celtic after a highly competitive game. A visit to Stamford Bridge on Saturday afternoon saw Chelsea defeat Spurs on a 2-1 score line, a memorable moment was the scrolling of a message on the large display screen during the half time interval as “Chelsea FC welcomes Rearcross FC to Stamford Bridge”, surely a David & Goliath pairing! Chelsea scored the winner in the 92nd minute through William Gallas after Michael Essien had put the home team ahead in the opening half, Jermaine Jenas bagged the Spurs goal.

Rearcross were in action again on the Sunday morning with a game against Wellington FC and were somewhat unlucky to lose out on a narrow 2-1 scoreline, Martin McLoughlin netted the Rearcross goal.

A weary and exhausted group arrived back in Rearcross on Monday evening. Our sincere thanks and acknowledgement to Tom Nolan & Mick Nolan and their extended families for the great welcome and hospitality afforded to Rearcross FC during our trips to London.