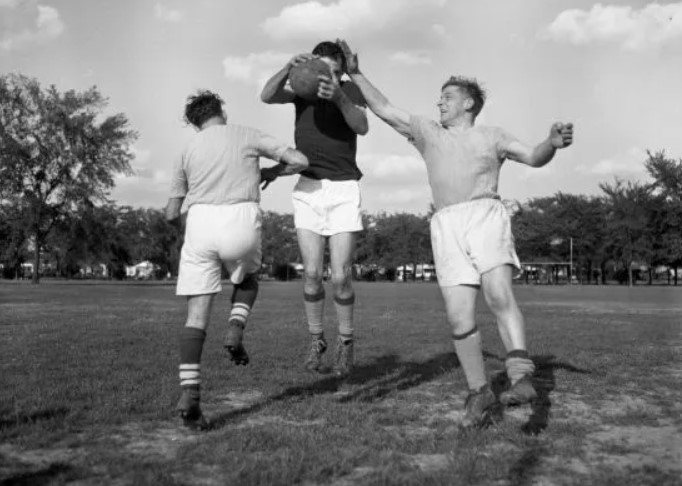 The mid 1970’s saw players from the Club lining out with Rearcross Gaelic Football team in a series of games played against neighbours Toor on a home and away basis. Compromise rules series are often associated with touring sides, so players from the Club were bucking the trend by touring in Toor or so to speak. The legendary encounters were inspired by the great Dublin / Kerry clashes of the seventies and the intensity of the Rearcross / Toor clashes were surely on a par producing some classic encounters. Games were played at underage and men’s level and in some instances were organized in conjunction with Sports days for the Youth of the area which included athletics events, donkey derbies in addition to entertainment for all the family. The following extracts are courtesy of Johnny Gleeson and the Nenagh Guardian

21st August 1976
All roads lead to Rearcross next Sunday for the annual Gaelic football match between neighbouring parishes Toor and Rearcross. It’s hard to know who is going to win as both teams have some great players like PJ Caplis, Gerry O’Toole, Gerry Quigley (Rearcross) and Owen Carey, Tony Murphy and Donal Kennedy (Toor). The match will commence at 2 p.m. sharp.

28th August 1976
In last Sunday’s football match between Rearcross and Toor, Rearcross were victorious by 7-3 to 3-4. Outstanding for Rearcross were PJ Caplis Denis Kennedy, Jim Carey and Tim Kennedy.

18th September 1976
Rearcross Gaelic footballers travel to Toor next Sunday for a game with the locals. Toor will be out for revenge as Rearcross beat them recently. On that occasion Toor were missing Johnny McGrath but Johnny will be in the line-up next Sunday.

6th November 1976
Rearcross had one point to spare over Toor in a football challenge game last Sunday.

Sat 9th July 1977
At present on vacation from Los Angeles is Fr Pat O’Dwyer. Fr Pat is son of Mr and Mrs Jerry O’Dwyer. Fr Pat is a great sports fan and last year lined out at centre-back on the Toor team for their Annual Gaelic football match against Rearcross. Toor were victorious on that occassion but Rearcross have high hopes of winning this year as those great players Owen Carry and Tony Murphy have called it a day.

30th July 1977
The annual confrontation between neighbouring parish Toor and Rearcross takes place in Rearcross this Sunday (2.30PM). As usual the match is expected to be very exciting as both teams have some excellent players notably Timmy Kennedy, Jimmy Carey, Jim O’Toole and Gerry O’Toole for the home side and for Toor Din Kennedy, Jim Kennedy, Donal Kennedy, Owen Carey and Tony Murphy. Local piper Dinny Lenihan will parade both teams around the field before the game.

13th August 1977
In last Sunday’s match between Rearcross and Toor at Rearcross the home side were victorious by
4-15 to 4-4. Best for Rearcross were Timmy Kennedy. PJ Caplis, Gerry Quigley and Mick Quigley Outstanding for Toor were Jim Kennedy, Mike Harrington, Harry Ryan and Din Kennedy. The game produced some very exciting football and was played in a very sporting manner.

1st Oct 1977
A children’s sports will be held in Toor on this Sunday. It will be followed by a Gaelic football match between Toor/Foilduff and Rearcross.

7th Oct 1978
Sports for all Day was marked in this area by a children’s Sports and a Gaelic football match between Rearcross and Toor. The venture was an outstanding success and these were over three hundred people present. The events took place in brilliant sunshine and were enjoyed by all. In the Gaelic football match Rearcross defeated Toor by 6-21 to 2-3. Toor need not feel one bit ashamed at this defeat as most of their team were in the Veteran class and Rearcross had youth on their side. Best for Rearcross were: Tim Kennedy, John Deegan, Paud Nolan, James Carey, Denis Kennedy and PJ Ryan. For Toor: John Ryan, Din Kennedy, Jim Kennedy, Tom O’Dwyer and Owen Carey were best.
Rearcross Team: Donie Nolan, James Carey, Tim Kennedy(Capt), PJ O’Gorman, Denis Kennedy, PJ Ryan, John Deegan, John Fahy, Jimmy Farrell, Mick Quigley, “The Yank” McLoughlin, Paud Nolan, Ned Gleeson, TJ O’Toole, John Gleeson. The winners of the sports and the match will be presented with their medals at a special dance in Rearcross Hall on this Friday night