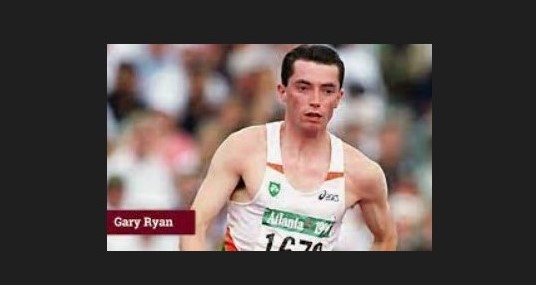 From playing with Rearcross U-12s to contesting the midfield sector against Roy Keane in a Munster Youths Cup final and then competing in two Olympic Games before scoring eight goals for Rearcross ‘B’ in the 2015/2016 is a more than eventful career to say the least! Gary started his soccer career with Rearcross and also enjoyed stellar spells with his native Kilcommon FC in later years. The Reiska man showing early promise and signed for Limerick FC winning a Munster Youths medal in 1988 with victory over Cork side Rockmount FC with the Ireland and Manchester United legend on the losing side on that occasion! The Limerick side only lost one game that season which was the FAI Youth Cup semi-final. After two seasons with Limerick City, Gary signed for Waterford United and played senior soccer for a very brief spell before taking a sabbatical from the beautiful game to concentrate on athletics.

The Kilcommon native finished 4th in the 200m at the World University game in 1997 and became the first Irish athlete to a make a major global sprint final and was also a semi-finalist at several World and European championships. Gary also competed in the 200m and 4 x 100 meters at 1996 Atlanta Olympics and then again in the Sydney Olympics 4 years later and went on to win a bronze medal at the 2004 World Indoor 4 x 400m in Budapest. A glittering career saw Gary set 25 national senior records at 60m, 100m, 200m, 200m Indoor, 4x100m and 4x200m and 4x400m indoor grades culminating in 18 National Senior titles. Captaincy of the Irish Athletics team between 2002 and 2006 was an honour bestowed on the athlete who is one of the most capped Irish Internationals of all time.

The former Olympian is currently the Lead Fitness Coach with the Tipperary Senior Hurling Team a position held since 2014 and has been strength and conditioning coach to a large number of athletes in recent years including World U23 Handball Champion Diarmuid Nash and World Kickboxing Champion Dessie Leonard. Gary also coached a number of sprinters to World and European Championships and went on to become Director of Coaching for Athletics Ireland on retiring from competitive athletics in 2006 and was head coach to International underage teams for a number of years. Now working with the University of Limerick leading a Sport and Physical Activity project called UL Beo which operates a broad range of projects from High Performance sport to Children’s physical activity programmes and research.