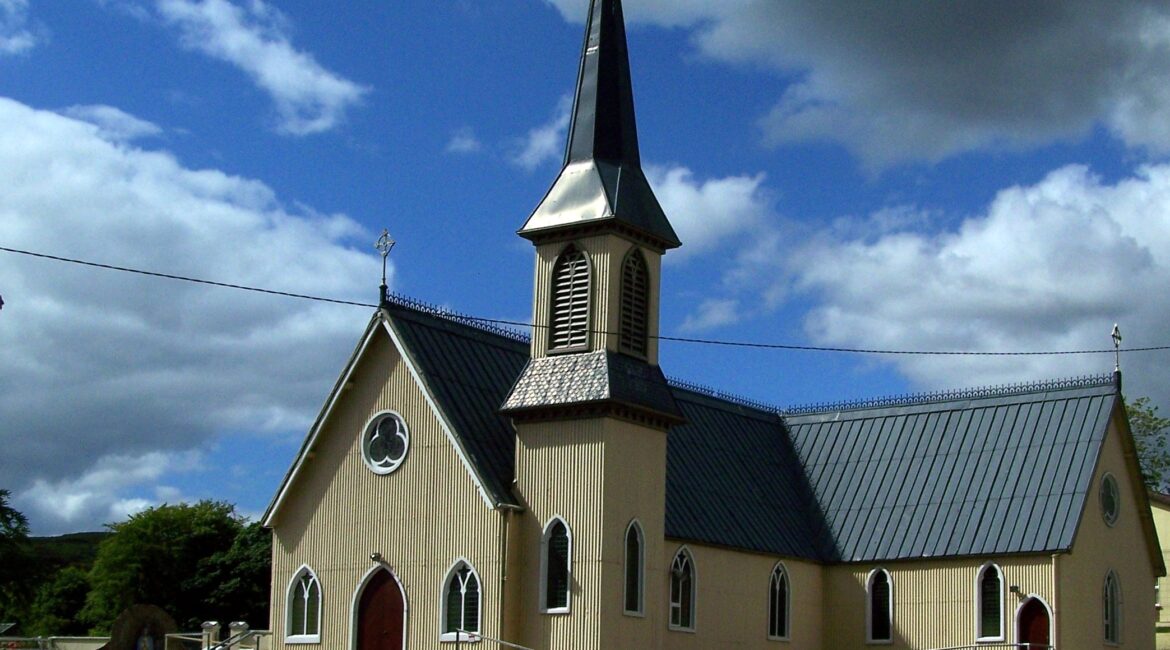 The Church of the Visitation, Rearcross

Rearcross Church has been central to Club members’ lives on a weekly basis over the years in addition to celebrating life’s happy and indeed sad family events. The Club launched a Church Picture Fundraiser in 1998 where a painting of the Church and adjacent school was commissioned. Framed pictures are proudly displayed in many Rearcross homes and various parts of Ireland, pictures were also purchased by emigrants in various worldwide locations who had started their lives in Rearcross. The Church pictures are still being sold such has been the affinity to Rearcross Church by Rearcross people far and near and the proceeds from the fundraiser have amounted to circa €28,000 heretofore. The Church still stands as resplendent as ever and a proud feature in the centre of our village.

Rearcross Church was erected in 1887 and is unique because it is the only one of its kind in Ireland. During the 1850’s there was a small thatched church in Garavane adjacent to Rearcross where the Quinlan family now lives. In 1884 this church fell into disrepair during a storm and could no longer 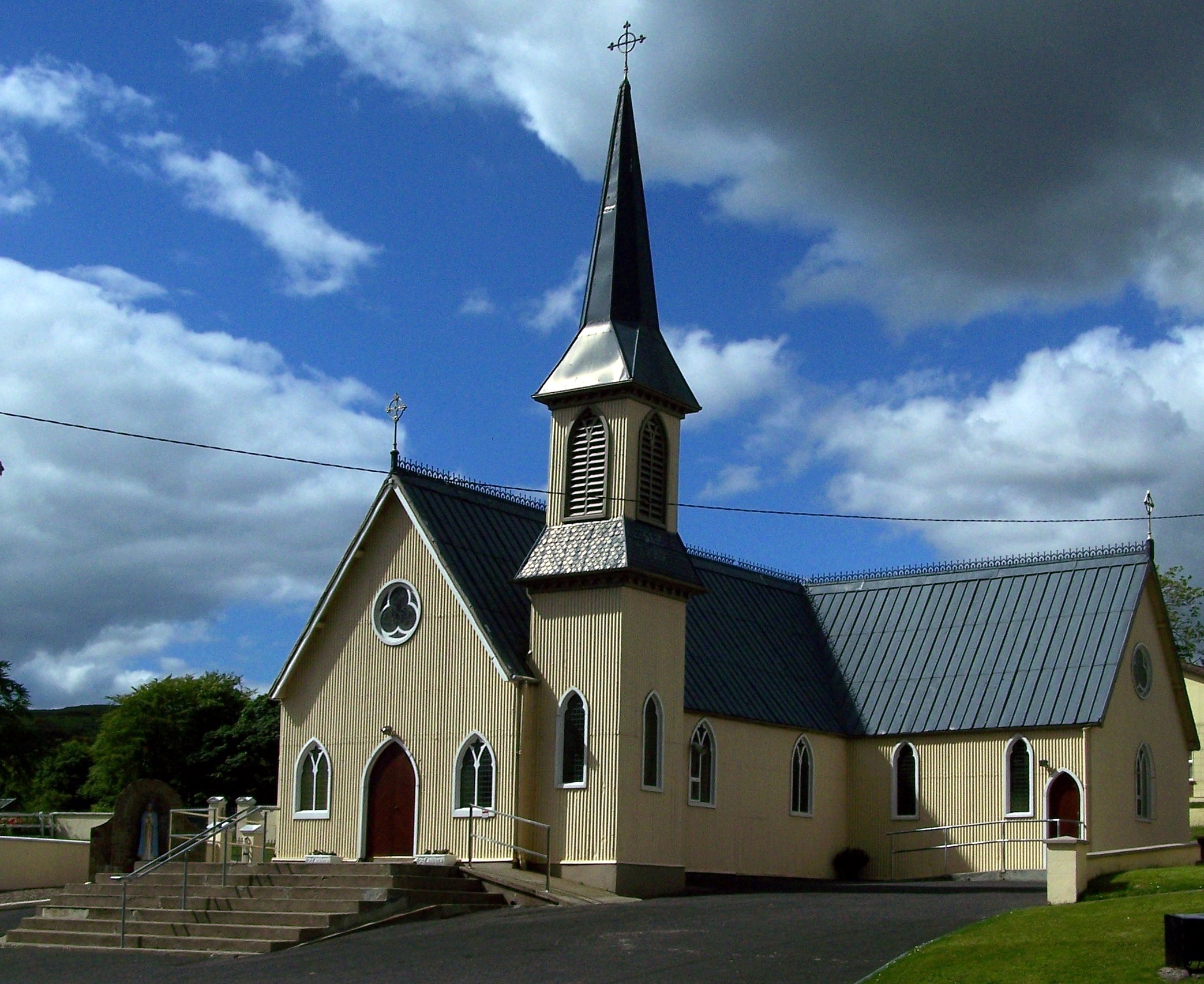 be used to celebrate mass or any religious occasion. The altar stone, the chalice and the vestments used in this church were in the custody of Fr. Ned Ryan, parish priest of Kilcommon for many years. They are now preserved in the National Museum in Dublin. When Fr. William McKeogh came to Rearcross in 1886 there was no church there, and people went across to Kilcommon over the mountains, a journey of over five miles to Sunday Mass while others made their way to Tour.

The 1880’s was a time when the Industrial Revolution in England was in full flight creating massive social difficulties for the people of England whose areas had been de-populated as people made their way to the tin mines and coalmines in Wales, the midlands and the Northeast. There were many disused churches as these areas had been crippled population wise due to emigration. Rearcross Church is pure tin not galvanised as sometimes misunderstood by people. The tin was rolled in the tin mines in Wales and therefore cannot rust. In 1887 Fr. McKeogh went to Wales, did a deal to purchase the church which was to be erected in Rearcross. The contract price of the church was three hundred pounds. The church was dismantled and taken down in many sections and brought by boat to Limerick Docks. The men from Rearcross went with their horses and carts to Limerick and transported it to Rearcross where three specialists had come from Wales to erect it. The last items to be erected was the bell weighing half a ton and the steeple measuring seven feet. While the church was being erected mass was celebrated in the school. When it was re-erected, the locals said it wouldn’t last a week, that the first wind would drive it into the first nearby field. One hundred and twenty-eight years later it is still there as proud and as beautiful as ever.

Another important landmark in Rearcross village is the old School located beside the Church and which also featured in the Club’s Picture Fundraiser painting. The school was opened in 1881 and closed in 1970. The building was retrofitted to the highest standards in recent years by Rearcross Community Council for use as a Community Centre and hosts a multiplicity of events on a yearly basis.

Whilst the Club is celebrating 50 years of soccer in Rearcross 1966 to 2016, looking back a further 50 years to 1916 shows the names of pupils enrolled in Rearcross School during the year of the Rising. Interestingly, only the boy’s enrolment is available whilst the girl’s enrolment and School Register, with addresses, is available. It is understood that the male register was confiscated by the RIC during the War of Independence. 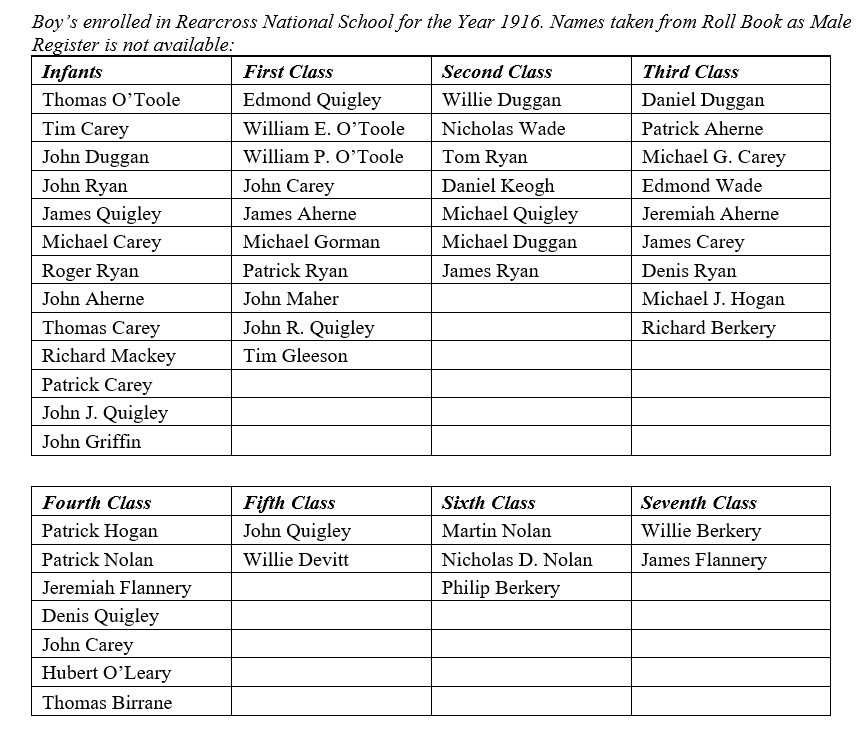 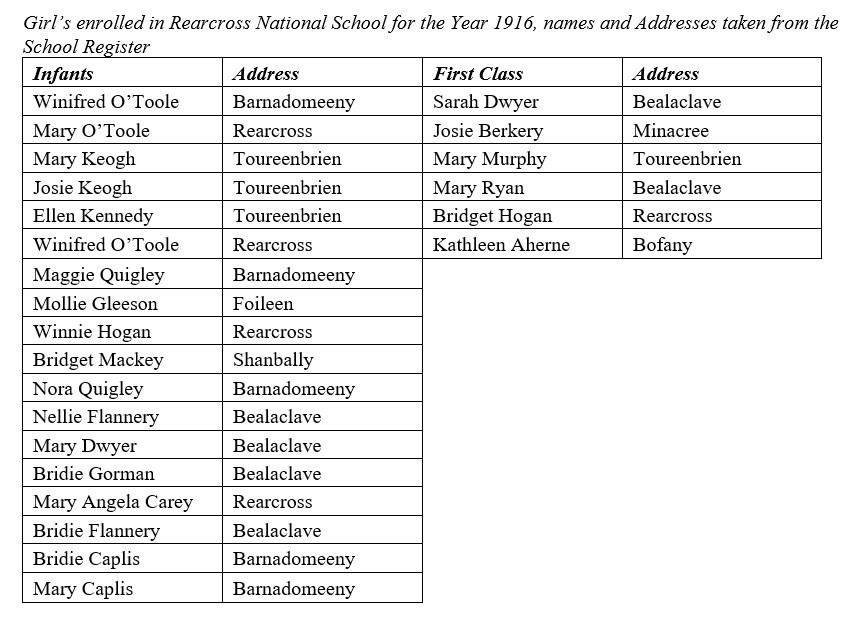 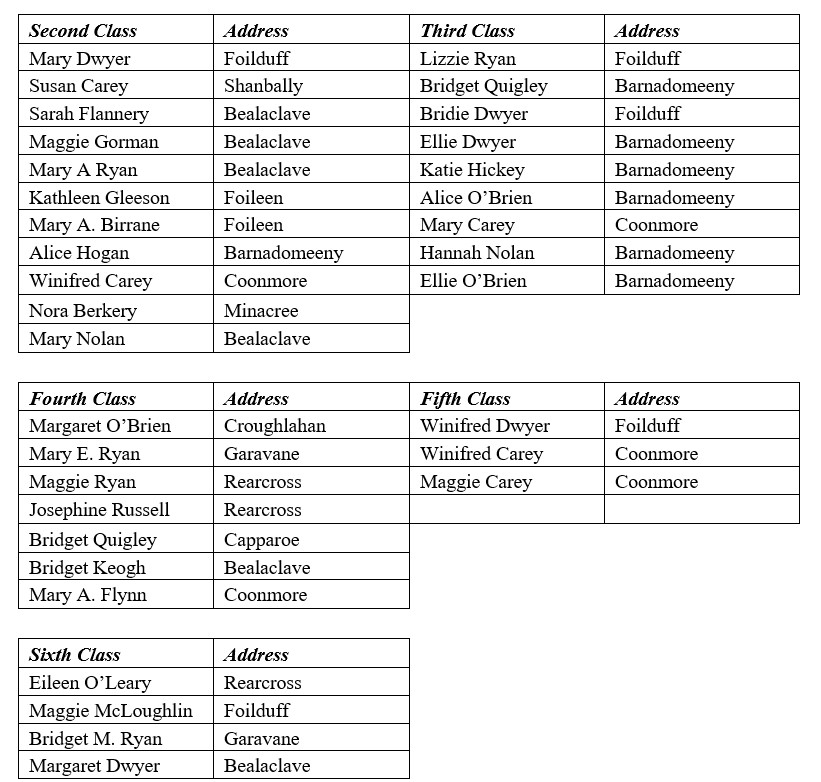