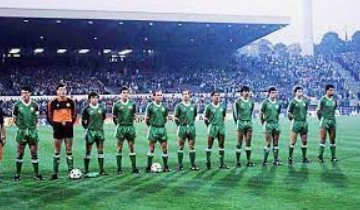 There is no doubt that Rearcross FC players travelled to see our national side in the seventies and early eighties, but I suppose the first ‘official’ Club trip took place on 10th September 1986 when a group of 14 (or sometimes referred to as 13 & 1 for those with memories of the outing!) departed Rearcross in the early morning to make the trek to Lansdowne Road for a Euro’ 88 Qualifier between Ireland and Belgium. After numerous pit stops, we eventually arrived at a packed Stadium to see Frank Stapleton level matters in the first half after Belgium took an early lead and then Liam Brady snatched a late and crucial equalizer on 89 minutes to send the Rea boy’s home more than happy. Club members made numerous trips to home and away Internationals after that with four “bravehearts” travelling to Italia ’90, in what was a memorable trip by all accounts.

Rearcross FC was also represented at USA ’94 and we are still looking for our club flag which went ‘astray’ either inside the Giant’s Stadium or during the post-match festivities following that Ray Houghton goal.

1995 was an eventful year with Club members in Lansdowne Road for the infamously abandoned Ireland v England match. Our two Rearcross FC stalwarts, in the West Stand, remained calm when the seats started hurtling through the air, but they came through unscathed. An extended stay in Beggars Bush that evening saw the Rearcross contingent make their way safely from the battle zone, albeit through empty streets, as night fell. The next voyage was a November trip to the Stadium of Light in Lisbon to see Ireland go under on a 3-0 scoreline. A crowd of 80,000, in an uncovered all seater stadium, sat glumly as the warm rain pelted down. It capped off a bad night for the Irish on the playing front, but it didn’t dampen the merriment of the travelling Irish and their Rearcross delegation. A boat trip to Liverpool four weeks later in December of that year was also a truly memorable occasion as Ireland took on the Dutch in the Euro ’96 qualifier play-off.  Two goals by Patrick Kluivert ensured defeat for Ireland. This match was to be Jack Charlton’s last game in charge. At the end of the game, Charlton made a lap of honour as a gesture of thanks to the Irish fans marking the end of a great era in Irish soccer.

Ironically, the Dutch were central to another standout World Cup qualification game which took place in Lansdowne Road in 2001 when Roy Keane’s tackle on Marc Overmars set the tone for a famous 1-0 win and a man of the match accolade for the Cork player. Jason McAteer scored the crucial goal which ensured Ireland’s qualification for 2002 World Cup.

Tel Aviv was the destination, in June 2005, for a World Cup qualifier with Israel. Ireland took a 2-0 lead, through Ian Harte and Robbie Keane, but the home side came back to level matters with our two stalwarts from Rea in attendance.

The Club was well represented at Stephen Staunton’s first competitive outing against the Germans in a Euro 2008 qualifier played in Stuttgart in September 2006 where the German’s emerged narrow, 1-0 winners, thanks to a Lucas Podolski goal. The Irish Manager’s frustration was in evidence when he was sent-off for kicking a water bottle.

Giovanni Trapattoni took charge of the Irish team in 2008 and Rearcross FC were honoured to provide the Ball Boys/Girls for his opening encounter against Serbia played at Croke Park, on 28th May, in what was a memorable occasion for the Slieve Felim Club.

The next generation of Club trippers made their way to Poland for Euro 2012, tales from this trip were slow to emerge typical of what ‘goes on tour stays on tour’.

Two ‘former greats’ made the trip to Wembley in May 2013 to see Shane Long head the opener against England, but Frank Lampard pegged it back level for the home side. Euro 2016 saw the Rearcross FC represented at the Stade de France for the Sweden encounter and then the same two former greats were in Lille to see Ireland secure a thrilling one nil over Italy, thanks to a Robbie Brady header to secure a last sixteen spot against France. The hosts held the upper hand again on this occasion with a 2-1 result, but the Irish can be proud of their performances on and off the field. We await the next adventure for the Boys in Green!