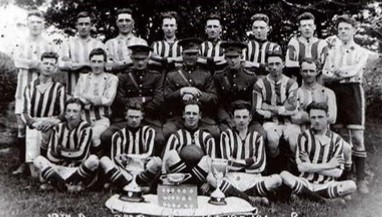 1878 is the year which has been credited with the birth of Irish Soccer. Soccer is likely to have been played by soldiers, students and others who may have seen the game in Britain, however, before this there had been no formal club established in Ireland. In 1878 two Scottish clubs Caledonians and Queens Park were invited by J.A McAlery to play a match in Belfast. This was the formal introduction of the game to Ireland. Within the next two years McAlery had founded Cliftonville F.C and also had helped found the Irish Football Association in Belfast 1880.  However, despite eventually expanding into Dublin the game would take another 20 years to formally establish itself in Tipperary. Perhaps the stigmatism of the game as a garrison game played by predominately the British army didn’t help the game create a home in such a Catholic and Nationalist stronghold as Tipperary.

The Irish league during the 1880s and early 1900s was dominated by garrison teams who played against clubs across Ireland.  Alan Bairner makes the point that soccer was at a disadvantage due to the fact it was so strongly associated as a game for army garrisons whereas rugby developed from largely an educational background was more accepted. Soccer was undeniably linked with the British military and at that time in Ireland, there was much ill feeling towards the British Army especially in a rural, predominately nationalist county, like Tipperary and it was always going to be a struggle for the sport to spread.

In 1897 soccer first made an appearance in Tipperary. Like cricket and rugby it was teams of garrison soldiers who first played the game. In April 1897, the 58th Field Battery, Clonmel and 14th Hussars, Carrick on Suir, played each other at Clonmel.  However, according to Neal Garnham, a soccer game did take place at Carrick on Suir on St. Stephen’s day 1896, and it was said to be the first formal game of soccer played in Munster.

In the early years of the Club, they played in the Limerick & District League and the North Munster Senior League. The majority of the teams in these leagues were teams from army barracks around Munster.  In 1912 the club reached the Irish Junior Cup final but were defeated, however amends were made in 1913 when the club won the North Munster league and also won the Tyler Club making them the one of the best soccer teams in Munster at that time.

The Army Barracks’ in Tipperary continued to play soccer. In 1915, the Royal Field Artillery at Cahir played against Army Service Corps, Clonmel. The money collected at the gates was to go towards the refugees rendered homeless during the war. The report claims the receipts would have been higher if the match was held on a bank holiday weekend. Soccer was not the most popular game in the county and WWI was another topic which controversially divided people’s opinion. Again the connection between soccer as a British garrison sport was more pronounced.  As noted in Cahir Park’s history, that up until the formation of the Irish Free State, virtually all games were played against military teams.

The men who played with Cahir Park came from all walks of life. On the team that won the Tyler Cup, was a butcher, a post office clerk, a public house owner and James McNamara a well-known Gaelic footballer who won an All-Ireland with Tipperary in 1920 and who also played on the Tipperary team involved on ‘Blood Sunday’.  Despite soccer’s name as a garrison game, Cahir AFC was different as it was open to men from all walks of life. Soccer was still struggling to make an impact.

In 1920s the establishment of a Tipperary League with only two civilian teams, Cahir Park and Clonmel Comrades FC. Tipperary’s third civilian team would come about with the foundation Tipperary Wanderers. Wanderers and Cahir Park were the teams who represented Tipperary in the national leagues and cups. They played regularly over the next few years.  Wanderer’s greatest game came against the mighty Shamrock Rovers when they beat the Dublin side 2-0 in the Irish Cup. The game was forced to a replay, however, when Shamrock Rovers objected to two of the Tipperary players. Wanderers lost the replay.

These teams had only a minor impact on the game compared to Cahir. Cahir was different from all other teams in Tipperary at that time because they had the backing of local landowner, Richard Butler Charteris, who loaned the grounds to Cahir Park.

Cahir is interesting because it is not only one of Ireland’s oldest Clubs but also because of those involved in the Club. It included very few soldiers and police unlike many other Clubs. It also included people from middle class backgrounds. The Reverend Hogg Church of Ireland Rector was the president of the Club and its membership came from a very wide spectrum.

The GAA’s ban on the game did not help or encourage, people of the countryside to play soccer, but big towns had the ability to support more than one sport, soccer found a home in Clonmel, Tipperary Town and Cahir. Cahir Park AFC being one of the oldest Club’s in the country and it is still in existence today over a hundred years later. It is fair to say that Cahir Park paved the way for all soccer clubs which exist in the county today.