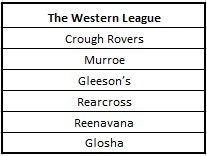 The Western League was formed in the early seventies to facilitate soccer teams in the Slieve Felim region to play competitive soccer in a League structure, records from that era are scant but more detail may be unearthed in time. The League operated from circa 1973 to 1977, games were played on a home and away basis. The Western League Cup was also part of the competition make up at that time. Crough Rovers won a league and Cup double in 1974 with Cup victory over Pallas on a 2 nil scoreline following a replay after the sides had finished level on a one all scoreline from the initial encounter.

1975 saw Murroe crowned league winners, while Rearcross won the Cup competition courtesy of a four-nil win over Murroe in the final played at the Clonteen venue. Nicky English turned in a man of the match performance netting four goals in the process before the celebrations began in earnest.

The Western League generated many great friendships over the years but in one particular instance, a temporary brotherly rift emerged when Jody and Dan Shanahan travelled to Newport for a Western League Cup game between Crough Rovers and Rearcross in 1975. Jody was playing with Crough Rovers at that time. Rearcross were short players and Patsy O’Brien approached Dan to play with Rea unbeknownst to Jody, who was heavily involved in match day preparations. The game kicked off and the first tackle on the younger sibling was incisive to say the least, Jody turned around to impress his concern with the severity of the challenge to discover that his brother and travel companion was the perpetrator. Incidentally, Rearcross won that game and a standoff ensued on the journey home. Rearcross went on to record Western Cup success that year and on the winning team was Dan Shanahan who had a fine outing in the final hitting the woodwork late on before Nicky English finished from close range.