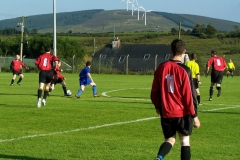 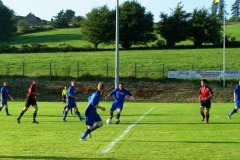 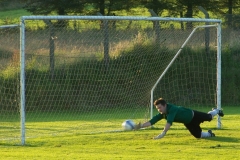 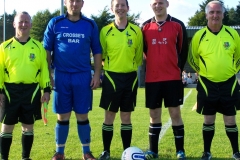 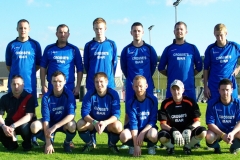 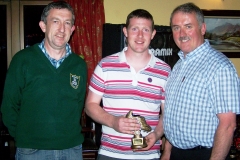 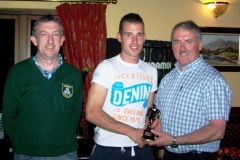 Newport AFC bridged a ten year gap to win the Ann Kennedy Cup against a Donohill Doon selection in a thrilling encounter played at a sun splashed Rearcross FC Grounds on Friday evening. The opening exchanges were evenly shared, however Donohill Doon raced in to the lead on seven minutes when Kevin Fox let fly with a smashing effort from all of twenty five yards that left the Newport custodian with no chance. The Newport reaction was swift and it was all square two minutes later when Glen Ryan advanced on the right before swinging in an inch perfect cross to Robert Ryan who headed between the posts. The tie was played at a fast pace throughout and the defending title holders came close in the 13th minute with a Joe Shanahan effort and then Alan Shanahan wasn’t far away with the follow up effort. Brian O’Sullivan was influential for Newport throughout and linked up with Brian Cosgrave on the fifteen minute mark with the left legged effort from distance dipping just wide. Robert Ryan was in the action again seconds later with a good effort that dragged outside the post. The TSDL side will rue not increasing their tally in the opening half and were denied by the woodwork eighteen minutes before the break when a Kevin Fox cross from the right was by met by Philip McGrath, however the ball ricocheted against the underside of the crossbar which was a real let off for Newport AFC. Jody Shanahan’s side were on top at this stage and a speculative looping effort in to the goal area saw Mark Barry eventually punch the ball on to the top of the crosssbar at the expense of a corner kick and then minutes later Brian Fox crashed a low drive in to the side netting. Newport’s Brian Cosgrave was a threat going forward and the number three struck over on 41 minutes. Newport made the first incision of the second half with Robert Ryan again posing the threat, however custodian Tom Carr made the save. Alan Shanahan directed a fine delivery in over the top on 54 minutes as Newport closed in to avert the danger conceding a corner kick in the process. Robert Ryan and Dean Lenihan were a constant threat for Newport, however a dogmatic Donohill Doon rearguard remained focussed to quell the threat. Blane Lenihan forced a fine save out of the Donohill Doon keeper on eleven minutes. Brian O’Sullivan’s contribution was immense throughout and the Newport number 7 broke through the centre seconds later, however the Donohill Doon net minder did enough to break up the move thirteen minutes in to the half. The Crosse’s Bar sponsored outfit counter attacked and won a free kick just outside the box a minute later. Michael O’Neill’s free kick was clinical and finished in the corner of the net despite the best efforts of Mark Barry. Indeed Newport might have gone further behind on 18 minutes but for a goal line clearance from David O’Brien after Mark Barry had made the initial save. The LDMC side were now chasing the game and came close with a David Murray headed effort which was cleared off the line. Newport kept the pressure on and had claims for a penalty turned down when Brian O’Sullivan hit the deck inside the box, however Alec McCormack wasn’t having any of it and flashed a yellow card to restore order. The equalizer came eighteen minutes from time when Kevin O’Brien’s corner kick was forced over the line by Brian Cosgrave following a goalmouth scramble. Both sides defended sternly in the remaining minutes to leave the sides locked on a two all score line at the full time whistle. A high tension penalty shootout saw Newport claim a sudden death win on a 6-5 score line with shot stopper Mark Barry coming out of goals to score Newport’s seventh spot kick to clinch a thrilling win for Newport AFC. Dean Lenihan, Robert Ryan, Kevin O’Brien, David O’Brien, Blane Lenihan scored the other Newport penalties while Joe Shanahan, Michael O’Neill, Pat Aherne, Sean O’Dwyer and Pat Hennessey were on the mark for Donohill / Doon.