earcross trudged their way into the Barry Cup Final after coming out on top in an eight goal thriller in a game played at Rearcross FC Grounds on Sunday last. By their nature semi finals can be drab affairs with both teams locked in a game of defensive chess looking for the elusive smash and grab, yet from the opening minutes this game seemed intent on singing a different tune – from Simon Kennedy’s snapshot in the opening minute, to two successive BT Harps attacks in the 3rd and 4th minute, to Greg Kennedy’s wonder goal in the 5th. Not many players, great or otherwise, have managed to score from the half way line in their careers, let alone from a volley, yet so it was to be on this occasion – a truly sublime goal which the fiery haired left back will surely remember for a long time to come. Derek O’ Toole – leader, trainer and motivator of this hardworking Rearcross team – has had some glorious moments this season and probably none more so than his sweet left footed free kick in the 12th minute which curled into the corner of the net to extend the home side’s lead. As a man standing in front of a swinging wrecking ball will attest, momentum is everything, and in the 21st minute a fine cross from Greg Kennedy found his brother Simon who swept around his marker and caught the ball on a left footed half volley from just outside the box which ended up in the net. BT Harps have proved dogged opponents throughout the season however and pulled one back a few minutes later via the penalty spot after the ball bounced off the turf and smacked into the hand of the luckless Kieran Devitt, who turned in a fine performance throughout. Derek O’ Toole was on the prowl once more in the coming minutes with a few attempts, even managing to strike the post on one occasion, yet it took club legend Matthew Ryan (L), outstanding in training as of late, to pop up with the killer goal with a minute to go in the half when his toe poked effort from just inside the box squirmed into the far corner of the net. With eight minutes gone in the second half BT Harps signalled they wouldn’t be giving up without a fight when they shot to the net from inside the box. The “brothers O’ Toole” then came to the fore for Rearcross with Eamonn coming from his goals to collect a number of corners in quick succession, Liam running the midfield in a disciplined manner Kim Jong-un would be proud of, Declan coming close with a fine effort from the right, and Derek grabbing the all important fifth goal with just over twenty five minutes remaining. And even though debate may still reign over whether Derek’s speculative effort was a shot on goal, or an attempted cross to the onrushing Simon Kennedy, it was nonetheless the straw that broke the camel’s back. The game played itself out in lively fashion from here on in, Rearcross well served by their back four and from the timely introduction of a number of experienced substitutes, BT Harps coming close on a few occasions and even managing to nick a third goal with just over ten minutes remaining after a deflected shot found its way past Eamonn O’ Toole in the Rearcross net. With a few minutes remaining Darren Quigley, who had been astutely watching the game in the first half, then tried an audacious half way line effort of his own in an effort to emulate the first goal of the game; ‘Not enough Weetabix’ on this occasion for the Blonde Barnadomeeney Bombshell however. Rearcross now face Nenagh AFC B in the Barry Cup Final, date and time to be confirmed. 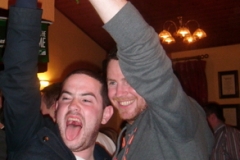 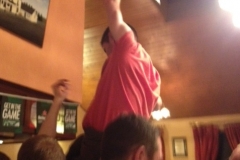 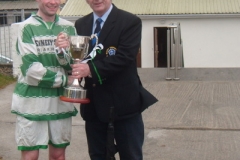 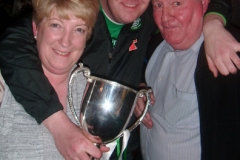 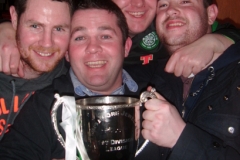 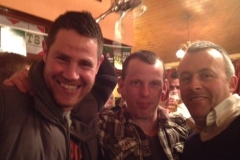 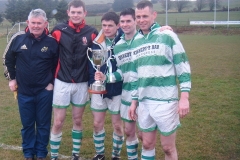 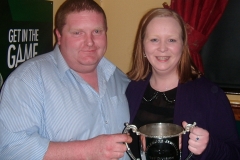 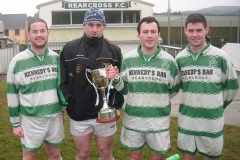 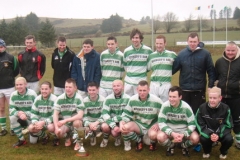 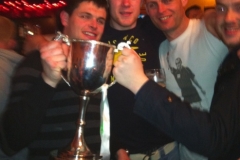 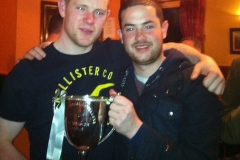 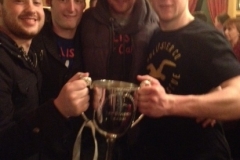 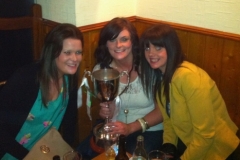 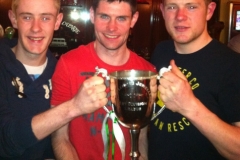 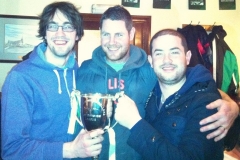