Nenagh Celtic ‘A’ made  a flying start to the 2009/2010 campaign with a five nil drubbing of Rearcross ‘A’ in the Premier Division Shield Final played at a rain swept Thurles Greyhound Stadium last Wednesday evening. The game was over as a contest inside the opening eight minutes when the Nenagh side got three chances and banged home a hat trick of goals in the process leaving Rearcross with an uphill battle. Arthur Mitchell was first to pounce for Celtic in the 2nd minute when Rearcross gave away possession in the middle of the field, the resulting attack saw hesitancy in the Rearcross rearguard allow Arthur Mitchell through on goal who made no mistake with a clinical dispatch to back of the net. The second goal came two minutes later after an attack down the right flank saw Mark Walsh produce the trickery before planting a left legged cross in to the danger area where Jimmy Hynes got up to head cleanly to the corner of the net. Rearcross were struggling to get to grips with the game and Matthew Ryan Luke’s commitment to a tackle saw the Rearcross player receiving a yellow card two minutes later. Further woe was to following in the 8th minute when former Arra Rovers player Brian Quinn was left unmarked in the centre before knocking to the net from close range. A white washing was on cards at this stage, however credit to a Rearcross side that dug deep and took the game to Celtic despite the score line. The first chance of the game for Rearcross came in the 13th minute when a move on the right saw the ball squared to the in-running Derek O’Toole who drilled just left of the upright. The game was being more evenly contested at this stage and a Mark McKenna header from a free kick was headed over the bar six minutes later. Nigel Ryan found space in the middle to fire on target midway through the half, however Aidan Herlihy in the Nenagh Celtic goal did well to smother the effort. Rearcross custodian Sean Sheehy was in the action a minute later with a smart save from the boot of Brian Quinn. Rearcross needed to score before the break and were denied with thirteen minutes remaining when a flowing move involving Shane Lenihan and James Gough saw the ball released to Nigel Ryan, the resulting shot was on target, however Aidan Herlihy showed great agility and got down to make a fine block. Rearcross battled hard in the second half to get back in to the game, however it seemed an insurmountable task when Arthur Mitchell got in for his second of the day in the 67th minute. Rearcross didn’t throw in the towel though and substitutes Andy Murphy, Declan O’Toole and Eamon Devitt all did well when introduced. The result was put beyond doubt with nine minutes remaining when the ball was crossed from the end line to Danny Ryan who made no mistake from close range to hand Nenagh Celtic a facile victory. Rearcross will be hoping to get some players back in advance of their league campaign, in any event Nenagh Celtic’s early season form indicates that they will be in the winner’s enclosure again before the season is out. Mike Young (North Tipperary & District League Chairman) presented the Premier Division Shield trophy to Nenagh Celtic captain Mark McKenna after the game. 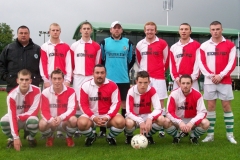 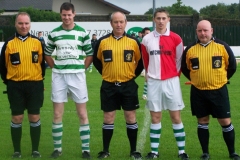