The jubilation and elation was palpable last Sunday afternoon in Rearcross as Val Kennedy hoisted the Third Division League Cup to land a first League Title for Rearcross ‘B’ and a first for the Club since it’s affiliation to North Tipperary & District League in 1983 with a thrilling 2-1 victory against fellow league contenders Boher in what was the final league game of the season where a win or a draw for the home side would clinch the title. It was a case of lucky thirteen for Rearcross ‘B’ who played their first league game thirteen years ago and lifted their first league title on the 13th March, the opening exchanges were evenly shared with Tommy Ryan Luke and Val Kennedy making vital clearances early on for the home side, a good passing move on 25 minutes saw Denis Kennedy getting a shot in, however the effort was blocked down, Davy Ryan Luke sent Thomas Kennedy through on the left three minutes later, the Boher full back closed in and the left footed strike was deflected out for a corner kick. Liam Ryan was given room to get in a headed effort in the 31st minute which flew over the crossbar, Boher were awarded a free kick on the edge of the box shortly before the break, the danger abated as the ball rebounded of the wall and away to safety. Rearcross made a promising start to the second half and Thomas Kennedy released Liam Ryan on the left who made good contact four minutes in, however the ball finished in the side netting, Boher came dangerously close in the sixth minute when Steven Stritch’s glancing header from a corner flew just off target, the visitors threatened again three minutes later, this time play was called back for an offside infringement, in any case it mattered little as Simon Kennedy had made the save. Rearcross were rattled in the 57th minute when Shane Hickey got in to head to the net, the home side had to dig deep after this and did so in admirable fashion, Liam Nolan(B) got a shot on target three minutes later, however the visiting custodian was well positioned to save, Paul Murphy then struck in the 67th minute following a corner kick, again the Boher keeper was in the right place at the right time to deny the home side, Boher counter attacked and it took a point blank save from Simon Kennedy to keep the score line intact after John Stritch had waltzed through the Rearcross rearguard, this save added impetus to the Rearcross cause, Liam Ryan took up a good position in front of the Boher goal and turned to get the shot in with 19 minutes remaining, however the keeper was able to gather. Rearcross got the all important goal on 78 minutes after a period of sustained pressure, that resulted in a goalmouth skirmish with the ball eventually breaking to Denis Kennedy who blasted the sweetest goal of his illustrious career to the back of the net from fourteen yards much to the delight of the large band of Rearcross supporters in attendance, there was only going to be one winner after this and a Nigel Ryan effort wasn’t far off the mark two minutes later, Boher didn’t throw in the towel though and Simon Kennedy had to back peddle with five minutes remaining to hold on to a delivery from the left. Rearcross scored the winner with five minutes remaining when Denis Kennedy turned provider to Nigel Ryan who raced through on the right and sent a delightful shot inside the far upright leaving to copper fasten the League Title for a Rearcross side that were deserving and worthy winners, there were great scenes of jubilation when the final whistle sounded, all players played their hearts out on the day with outstanding displays from Tommy Ryan Luke, Val Kennedy and Thomas Kennedy, however the man of the match accolade goes to the evergreen Denis Kennedy who scored the crucial goal at a vital time and turned in a fine performance throughout and also had the unusual distinction of having his son Simon playing in goals for the victorious Rearcross ‘B’ squad.
Chris McFadden representing the North Tipperary and District League presenting the League Cup to Rearcross captain Val Kennedy who gave a rousing victory speech, and who dedicated the victory to the memory of Ann Kennedy and Liam Sheehy, Liam Nolan (Congo Bar) main sponsor of Rearcross ‘B’ was also thanked, a special word of thanks to B team Manager Myles Devitt and selector Liam Nolan(B) for spearheading this fantastic victory for our Club, thanks also to trainer Kenneth O’Brien for his contribution and work with the squad, thanks to all supporters who came out in large numbers to support Rearcross F.C. on a most historic day for the Club.

For the record, the following panel of players lined out for Rearcross ‘B’ in their debut game in the NT&DL against Holycross ‘B’ in 1992, incidentally Rearcross drew the game on a one all score line.
Rearcross ‘B’ Panel 1992: Bob Reynolds, Liam Caplis, PJ Caplis, Garrett Kennedy, Eamon Ryan, Seamus Taylor, Myles Devitt, Pat Nolan, Rody Kennedy, Liam Nolan©, Pat Russell, Dermot Hammersley, Mike Gleeson, Tom Boland 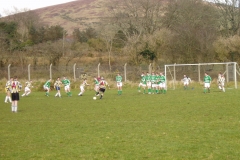 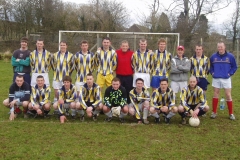 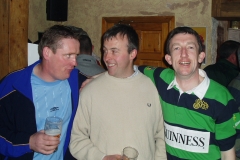 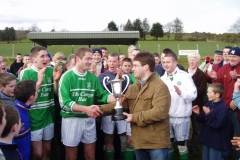 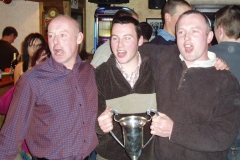 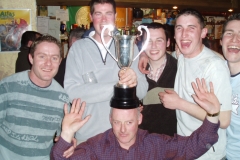 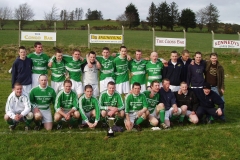 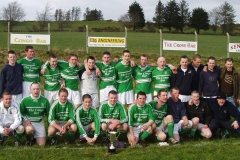 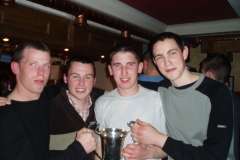 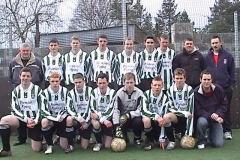