Rearcross U-13’s competing in their first Final lost out on a three nil score line following a gallant display against Premier Division side Moneygall at Newtown on Saturday afternoon. The green & whites faced an uphill battle against a strong Moneygall side that attacked from the kick off with the underdogs doing well to weather the early storm with Michael Feehan and Aaron Ryan particularly impressive. The opener came after nine minutes when Gearóid Murphy’s in swinging corner kick went all the way to the net. Rearcross were also having their moments as Michael Feehan set up Adam Hurley on thirteen minutes with the resulting effort on target, however the shot was blocked down at the expense of a corner kick. Rearcross custodian Pat Carroll produced an outstanding display between the posts and did well to push away a menacing cross three minutes later. The Premier Division side counter attacked as Trudie Hurley read the situation to perfection to cut out the danger. Rearcross were dealt a succour blow when the star spangled side pounced for two goals in the space of a minute, the first coming in the 24th minute when Joe Fogarty latched on to a through ball to knock between the posts and then a minute later Jack O’Brien broke on the left before sending a low drive inside the far post. The signs were ominous for the Slieve Felim outfit at this stage, however full credit to a Rearcross side that showed tremendous character and were denied three minutes before the break when Michael Feehan’s long range free kick effort was on target after good by Conor Nolan in the middle of the field, however the Moneygall netminder and full back Timmy Flaherty combined to put the ball out for a corner kick. Aaron McMahon and Philip Deegan linked up to threaten on the stroke of half time, however Moneygall closed in to quell the attack.
Rearcross shotstopper Pat Carroll produced a magnificent display of goalkeeping in the second half and was in the action two minutes after the restart with a good block. A long delivery launched from the middle of the field saw Pat Carroll advancing to punch clear under pressure before James Rochford tidied up. Grace O’Toole tracked back to put in a fine tackle to thwart a Moneygall attack on 38 minutes. Moneygall’s Gearóid Larkin paced through on the right a minute later, however Pat Carroll narrowed the angle to get a vital touch. Moneygall continued to press, Joe Fogarty’s first time effort from just outside the box flew over the cross bar. The Rearcross custodian continued to excel and denied Gearóid Larkin again midway through the half with another fine block. The save of the game came ten minutes from time when Gearóid Murphy’s pile driver was destined for the roof of the net, however Pat Carroll reacted superbly to somehow turn the ball over the bar. The Rearcross number one parried over again minutes later after Aaron Ryan had applied the pressure on Paul Costello. Rearcross made a strong finish to the game and were unlucky not to open their account after a mazy run by Pat O’Toole on the right saw Moneygall eventually clear their lines. Indeed, Rearcross had claims for a penalty waved on five minutes from time when a Moneygall defender appeared to handle on the edge of the six yard box. Adam Hurley’s well struck shot was then blocked down as the seconds ticked away before Pat O’Toole came close for Rearcross just before the full time whistle sounded. Rearcross can be very proud of their performance in their debut Final appearance and kept plugging right to the end against all the odds, while Moneygall were gracious winners on the day. Denny Ryan representing the NTSFL presented the Shield trophy to Moneygall captain Joe Fogarty after the game.

Player of the Match: Pat Carroll 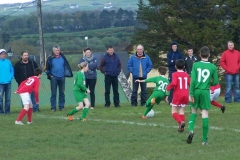 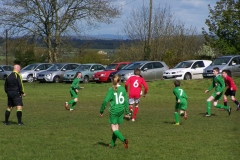 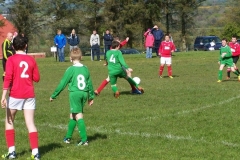 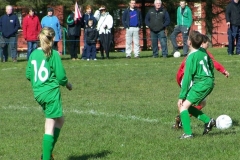 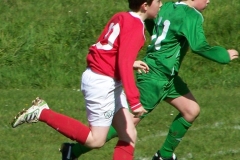 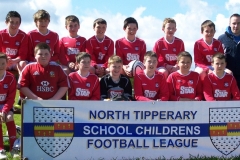 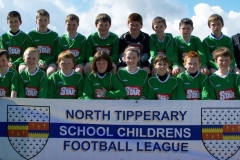