Rearcross ‘B’ emerged with a gallant victory against Ballymackey in the Second Division Shield Final played at Ballinree Sports Ground last Thursday evening following a penalty shootout. Rearcross made the brighter start, however it was Ballymackey who went ahead in the 8th minute when Rory Mounsey converted with aplomb from the penalty spot. Exchanges were fair and even after this with Ballymackey creating the better chances, however Rearcross drew level in the 37th minute when a shot from Tommy Ryan Luke(Garavane) finished in the back of net. The second half was a tough and close affair, Jim Caplis was very much to the fore for Rearcross between the posts, while at the other end Robert Harrington was unlucky to see his shot come off a Ballymackey defender and out for a corner following a fine flowing move. The sides were still deadlocked at the end of normal playing time so it was down to the dreaded penalty shootout to decide the outcome where Rearcross held the aces with Adrian Hurley, Robert Harrington and Tommy Ryan Luke(S) converting for Rearcross while Jim Caplis made two fine saves to thwart a luckless Ballymackey who had their marksmen in Rory Mounsey and Kevin Ryan. Mike Young (Chairman NT&DL) presented the Shield Trophy to an elated Adrian Hurley after the game. We would like to thank Ballymackey FC for accommodating a change of fixture. 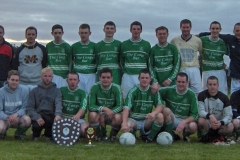