Rearcross ‘A’ were crowned Tipperary Cup champions with a smashing three nil victory against Blackcastle ‘A’ at Thurles Greyhound Stadium in what was a fanstastic occasion for Rearcross FC, the game was preceded by the Barry Cup Final where Rearcross ‘B’ bowed out in the most cruel fashion following a penalty shootout, Rearcross got off to a flying start against Blackcastle and were a goal to the good inside the 1st minute when an intricate passing movement released Sean Mullins who finished to the corner from the edge of the eighteen yard box, Rearcross were dominating the proceedings and Nigel Ryan produced the trickery on the right in the 18th minute before sending in a low drive that came back off the upright, Rearcross went two nil ahead in the 26th minute with Nigel Ryan intercepted the ball on the right and squared to Emmet Steed who knocked to the net from close range. Blackcastle upped the ante and Mark Cahill got a shot on target, however Sean Sheehy was able to make the save. Sean Sheehy was in the action again two minutes later, this time with a save from the boot of Stefan Leahy. Rearcross were on the back foot at this stage and James MaCarthy came treacherously close with a headed effort that skimmed the bottom of the post, Rearcross were relieved to hear the half time whistle although the reprieve was short lived as Blackcastle were awarded a penalty three minutes after the restart, Cathal Scully picked his spot, however Sean Sheehy had read the situation to perfection and got down to make a super save, Rearcross took full advantage after this and started to play with more fluency, Nigel Ryan found Emmet Steed who was unlucky to see his effort whiz over the bar in the 59th minute. Blackcastle were also playing creative football and Mel McBride fired on target on 62 minutes with the woodwork denying the Templemore marksman, Derek O’Toole who was outstanding throughout was making decisive tackles to continually thwart Blackcastle and it was from one of those tackles that Derek O’Toole won the ball and send a long delivery to Sean Mullins who kept his composure before lofting the ball to the back of the Blackcastle net with thirteen minutes remaining on the clock, maybe it was case of lucky thirteen for Rearcross with the Final also being played on the thirteenth, however the third goal signalled the end of the Blackcastle effort to a large part and Rearcross held on to secure a memorable victory against a Blackcastle side who were most magnanimous in defeat, Rearcross produced a determined all round performance with Sean Mullins arguably entitled to one of the plaudits on offer following his double strike. As the score line suggests, the Rearcross defensive quartet of Kevin Mullins, Simon Kennedy, Damien Mullins and Derek O’Toole were faultless throughout and were ably complemented by Sean Sheehy between the posts, PJ McLoughlin, Liam Nolan(B) and Sean Mullins dominated the midfield play, while Nigel Ryan, Emmet Steed and Diarmuid Sheehy were a constant threat to the Templemore side, Declan O’Toole was on fire when introduced to the fray, while Eamon Devitt and Liam Ryan did well after coming in to the action, all in all this was a panel effort and recognition also to Tommy Ryan Luke and James Gough who joined the ‘A’ panel following the disappointment of losing on a penalty shootout, thanks to Oliver Kennedy who joined the panel at the ninth hour following an injury scare to Sean Sheehy. A special and worthy mention for Paddy Ryan Luke who sustained a broken leg playing for Rearcross ‘A’ last November and we all wish Paddy a full and speedy recovery as quickly as possibly. Thanks to trainer Trevor Lovell for his work with the squad during the season. Thanks also to Club sponsors for their ongoing sponsorship of Rearcross FC and finally our thanks to all our supporters who travelled in large numbers to Thurles in support of Rearcross ‘B’ and Rearcross ‘A’.

Man of the Match: Sean Sheehy

“The Road to Victory”
1st Round :
Bye

“The last time I sang the renowned anthem ‘You’ll never walk alone’ was in the famous Kop in the company of a former great at Anfield in December 1995 when Jack Charlton brought the curtain down on the most successful period ever in Irish soccer, however the renditions in which I participated last Sunday evening gives a new symbolism to the legendary anthem and will instill lasting memories for Rearcross players and Managment team long in to the future” 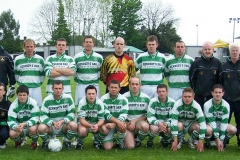 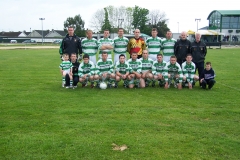 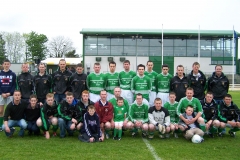 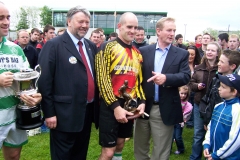 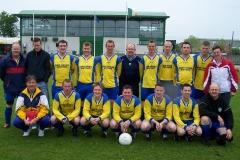