Rearcross U-16’s lost out to Ballymackey on a 4-1 score line in this U-16’s Shield Final played at a chilly Newtown on Thursday evening, Rearcross had already been crowned Division 1 League champions but met stiff opposition from their Premier Division opponents who were physically stronger in most sectors of the pitch which left the green & whites with a rather daunting task. The Ballinree side posed the early threat and the inevitable goal came with just four minutes gone when Kieran Bereton scored from the spot. Gary O’Brien’s free kick was on target two minutes later, however the Ballymackey custodian was able to gather. Ballymackey were enjoying the better of the exchanges creating the more clear cut chances in the process while opportunities for Rearcross were limited although a Gary O’Brien free kick on 22 minutes caused some difficulty for the Ballymackey keeper who gathered on the second attempt. The Slieve Felim side went two behind in the 25th minute when Kieran Bereton’s free kick from the left has headed to the net by Paul Ryan from the edge of the six yard box. Ballymackey could have stretched it to three on the half hour mark when Jack Farrell drilled wide from a good position. The Eamon Devitt & Declan O’Toole managed side were trying hard to get back in to the game with Patrick Deegan impressing in the middle of the field, however it was Ballymackey who hit the target again six minutes before the break when Kieran Bereton broke on the left to send a low effort inside the far upright. Rearcross needed to score before half time and the signs were ominous when the referee waved play on following claims for a handball inside the Ballymackey box. Paul Ryan came close to adding his second for the Ballinree side with a headed effort on the stroke of half time.
Rearcross turned in a much improved performance in the second half with Darragh Ryan Luke producing the goods to deny the opposition with two fine blocks inside the opening five minutes. Patrick Deegan’s free kick was well struck on 51 minutes, however Lorcan Haverty gone behind the effort to make a clean catch. Rearcross were left with a mountain to climb a minute later when right full Sean Kevin got forward to knock to the net from close range. Full credit to a Rearcross side that didn’t give up with Paul Ryan, Matthew Feehan, Brian Carey & Patrick Deegan to the fore against a Ballymackey side that continued to threaten with Darragh Ryan Luke again in the thick of the action with two parried saves. Rearcross put in a strong final quarter and Gary McMahon was unlucky with seventeen minutes to go when his lobbed effort clipped the woodwork. Brian Carey then squared to Patrick Carey seconds later, however the effort dragged left of the upright. Rearcross pulled a goal back in the 66th minute when Darragh Kennedy scored from the spot following a handball infringement. Rearcross were denied the goal of the game when Paul Ryan’s long delivery saw Patrick Carey’s first time back flick on target, however the Ballymackey shot stopper was positioned to collect. Two goals, one for either side, were disallowed in the space of a minute, first Ballymackey scored through Paul Ryan and then Gary O’Brien finished with a fine effort from the edge of the box two minutes from time, however the offside flag was up. NTSFL Chairman Tomas Ryan presented the Shield Trophy to Ballymackey captain Jack Farrell after the game.

Thanks to Declan O’Toole & Eamon Devitt for their work with the squad this season which culminated in a first Underage League Title for the Club since 1995/1996 season.

Finally, thanks to all Supporters who travelled to Newtown on the evening to support the team. 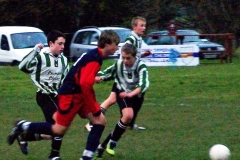 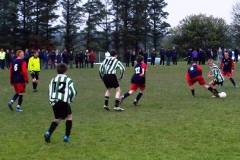 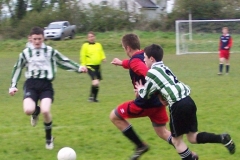 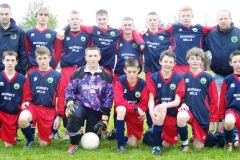 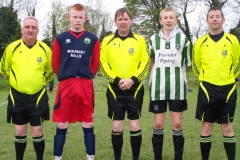 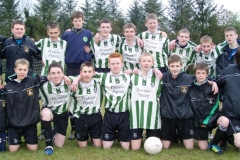