Rearcross Youths turned in a courageous and gallant performance against pre-match favourites Nenagh Town AFC in the Youths Shield Final played at Drombane last Saturday afternoon and were unfortunate in the end not to have taken the title after loosing out in the penalty shootout when the sides finished on a two all score line at the final whistle. Nenagh went on the attack from the kick off, however Jim Caplis in the Rearcross goal was in scintillating form and thwarted the Nenagh attack on several occasions throughout the game, the first save coming in the 4th minute with a fine reflex block, Nenagh surged forward in droves and Seamus Feehan was also in top form for Rearcross and headed clear on ten minutes. Rearcross settled after the early onslaught and a Jamie Ryan effort wasn’t far off minutes later, Nenagh took the lead in the 23rd minute when Simon Gaynor got behind the Rearcross defence and slotted between the posts, Jim Caplis came to the rescue for Rearcross three minutes later when he reacted superbly to finger tip the ball around the far upright, Rearcross came back at Nenagh who were awakening to the fact they had a battle on their hands and Paul Hogan was unlucky to see his effort from out on the right finish in the side netting, Nenagh should have increased their lead a minute later, however the well struck effort was off target. Jim Caplis was again on hand in the 33rd minute to make a point blank save, Rearcross made a blistering finish to the half and were back on par in the 33rd minute when a Jamie Ryan free kick broke to Colin O’Doherty who knocked to the net from close range, Nenagh were still reeling from this set back when Rearcross took the lead with three minutes remaining in the half after a ball through the centre showed vulnerability in the Nenagh defence, Colin O’Doherty hassled and harried before poking to the ball to the corner of the net. Nenagh made a strong start to the second half and again it was the Rearcross custodian who denied the favourites a minute in with a save at the expense of a corner kick, Jim Caplis was in the action five minutes later with a fine body save before Derek Nolan cleaned up with a well timed tackle, a good Rearcross move in the 55th minute saw Paul Hogan advancing on the right with the resulting effort drifting over the crossbar. Nenagh shot just wide in the 70th minute and then a headed effort from George Hannigan was over the bar in the 67th minute. The Rearcross rearguard were frustrating the Nenagh attack time on time and it was to take a contentious equaliser with sixteen minutes remaining to let Nenagh back in to the game when the ball was adjudged to have been over the line with the credit going to Gordon Harding. Rearcross regrouped after this setback and played gallantly to the end with Jim Caplis who truly turned in a man of the match performance again to the fore, a nail biting finish saw Jim Caplis save splendidly when the ball looked to be destined for the top corner with two minutes remaining, and then Rearcross came agonisingly close with seconds remaining when Robert Harrington’s free kick from the edge of the box clipped the top of the cross bar with the Nenagh keeper beaten, it was Nenagh who had the luck in the penalty shoot out emerging victorious on a 4-2 score line, Simon Kennedy and Colin O’Doherty converted for Rearcross, while Michael O’Gorman, Damien Mitchell, Trevor Kennealy and Simon Gaynor were on the mark for Nenagh, North Tipperary and District League representative Michael Leo presented the Shield Trophy to Nenagh captain Michael O’Gorman after the game. 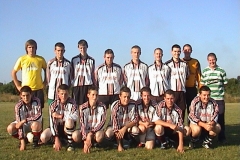 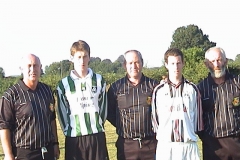 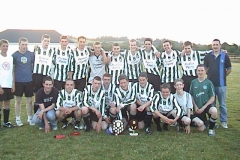 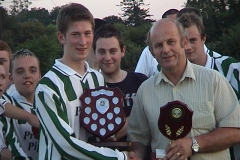